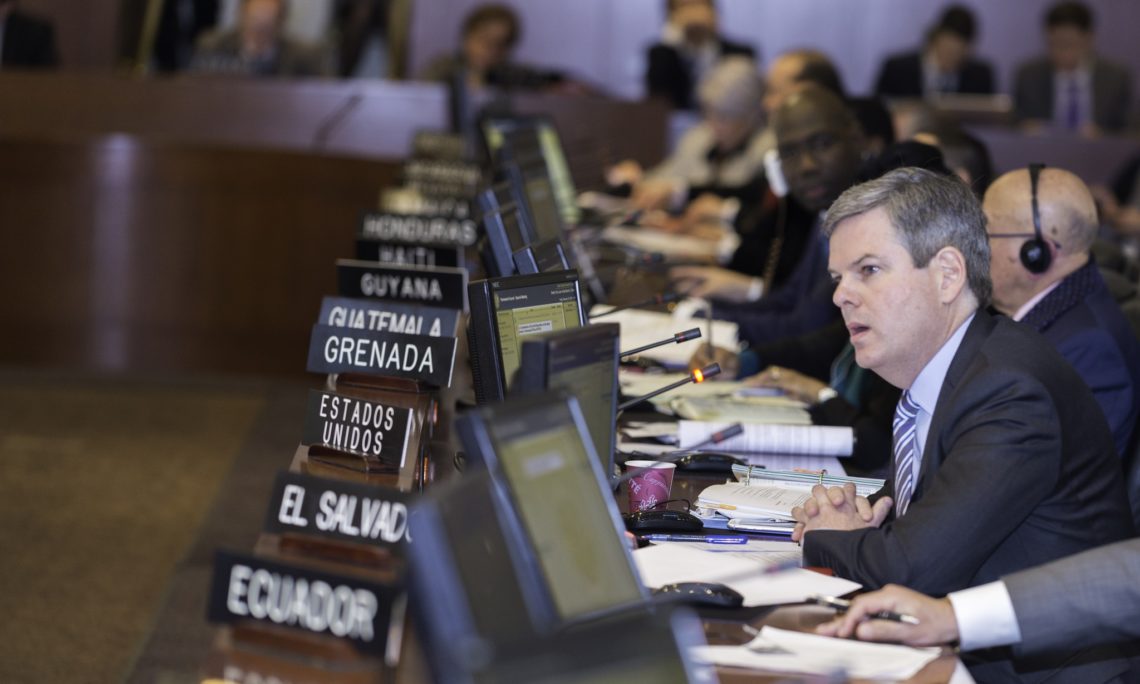 Interim Permanent Representative of the United States Kevin K. Sullivan addresses the Special Session of the Permanent Council on the situation in Venezuela, February 23, 2018. The Resolution was approved with 19 votes in favor, 5 against, 8 abstentions and 2 absences.

Thank you very much Mr. Chair.

Just another brief intervention to comment on some of the statements that a number of my colleagues here today have made. The United States is of course one of the member states proposing the draft resolution today, and we strongly believe that its content is timely, relevant and appropriate.

I think my distinguished colleague from Bolivia asked a valid question a few moments ago, which is — what are we accomplishing here? What are we seeking to accomplish with this resolution? And I think there is a simple answer to that.

I think our group of countries is seeking to highlight the deep concerns that we have about the course of events in Venezuela which has continued to evolve since the last time this body engaged on the situation — and we have some urgent concerns about those events.

My Dominican colleague mentioned a few moments ago the dialogue that the Dominican government generously and ably hosted for the Venezuelan government and opposition leaders to try precisely to find an appropriate way out of the current difficulties they’re encountering and put the country back on track and restore democratic order there.

The United States strongly supported that dialogue, as we have all previous efforts at dialogue, to resolve the difficulties in the Venezuelan Republic. But unfortunately, it became clear in the last round of negotiations, which was also supported by a number of other member states around this table today — both those selected by the government and several selected by the opposition — that the Venezuelan government was not prepared to show good faith and to demonstrate a willingness to agree to opposition requests in those negotiations that were nothing more than minimum guarantees necessary for free, fair and credible elections.

There is ample agreement around this table that free, fair and credible elections would be the most appropriate way to resolve the political crisis in Venezuela, and the United States continues to strongly support that idea. But unfortunately, the Maduro regime continues to deepen Venezuela’s rupture from its Constitution. And most recently, the Venezuelan government, President Maduro, has suggested that not only do they intend to move up the presidential elections to April 22nd without resolving any of the serious problems that exist in the electoral environment today, but most recently it has suggested it would like to move up the elections for the National Assembly, also for the coming weeks or months, in a way that is not consistent with the Constitution and in fact is continuing evidence that they are re-writing the rules as they go along, which is truly inconsistent with the idea of democracy that this body represents and has defended for many years now.

In addition to that, I think we see increasing humanitarian suffering in Venezuela, increasing malnutrition, increasing suffering by Venezuelans looking for medical assistance that is no longer available. All of us are concerned about these things, and all of these are elements of the urgency that we see in this situation, and which I believe has inspired countries that brought forth today’s draft resolution to do so, and on an urgent basis.

And so from our perspective, this is an appropriate time for the OAS to reengage on Venezuela, and in fact it is high time, past time for us to signal the grave concerns we have while at the same time leaving the door open to progress. I don’t think anything in the resolution today closes any doors. In fact, the resolution — which we believe is cast in very constructive terms — simply calls on the Venezuelan government to reconsider its decision to move up presidential elections without resolving the underlying issues about fairness, about access, about free participation.

We should not forget that over the last year and a half or so the Venezuelan government has prohibited the participation of a number of parties and important political figures in the electoral process, including many that appear to have ample support in reliable polling, thus denying the Venezuelan people valid options for an electoral process. We have also seen that hundreds of political prisoners remain detained and thus also unable to participate in a free and fair political process in addition to suffering from violations of their human rights.

So these are the kinds of concerns that I think have brought us to the table today, and they are in fact the motivation for bringing this issue before the Council. Thank you very much Mr. Chairman.

See Also: Text of the Resolution