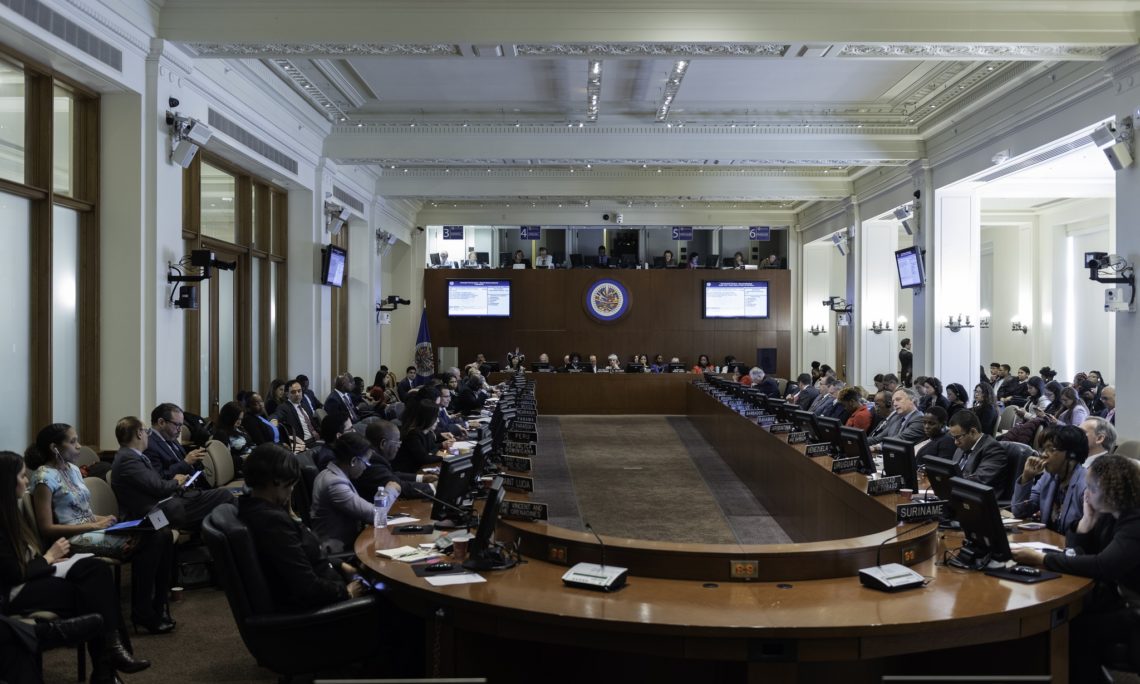 The Permanent Council of the Organization of American States (OAS), Washington, D.C.

Mr. Chairman, thank you very much for convening today’s special session of the Permanent Council to consider recent events in Venezuela, as well as the worsening humanitarian crisis.

We would like to thank the various experts who have provided us with such compelling data and testimony.  Their presentations should spur us all to take meaningful action.

Let me begin by stressing that the United States remains deeply concerned about the dire conditions facing the people of Venezuela both inside their country and throughout our region.  Millions of refugees and migrants continue to strain already-thin social safety nets, and health and education systems in receiving countries.

With this in mind, the United States commends the important steps governments of our region have taken to coordinate a regional response to this crisis, most recently in Quito, and to ensure coherent and whole-of-government responses.

In recognition of the enormous scope of the crisis, the United States continues to urge additional contributions from donors to the regional Refugee and Migrant Response Plan which supports the efforts of international organizations such as UNHCR, IOM, PAHO, and UNICEF, as well as NGOs, to meet growing needs in the region.

With respect to food insecurity, in particular, it is astounding that upwards of 3.7 million Venezuelans are malnourished, according to a joint report by the FAO and other UN agencies.  As we heard today, these heightened levels of food insecurity are a direct result of the Maduro regime’s strict control over food distribution within the country.

The former regime used hunger and the selective distribution of food to control its people.  Access to the CLAP food distribution program, public housing, and similar levers of state manipulation to electoral ends, must be de-politicized and dismantled immediately.

Fortunately, Mr. Chair, the OAS can play a key role in addressing the root causes of the humanitarian crisis in Venezuela.  Most importantly, the OAS can lend technical assistance to help rebuild responsive and inclusive institutions.

To this end, I also want to highlight the international humanitarian assistance conference, organized by the legitimate Guaido government, and held at the OAS on February 14.

During that conference, representatives from over 30 countries from all over the world offered their support to address the crisis.  It was therefore a clear and powerful signal of the growing international support for Interim President Guaido and his efforts to address the staggering needs of the Venezuelan people.

Mr. Chairman, the contrast between the Guaido government and the Maduro regime could not be more stark.  One is seeking helping for their starving people.  The other is using violence to block humanitarian assistance, rather than admit the bankruptcy of their corrupt system.

That is why we must work to urgently adopt the text tabled for today’s session by Colombia, in support of humanitarian access.

However, the United States’ ability to provide humanitarian aid in Venezuela has been restricted by the Maduro regime’s continued denial of this crisis and refusal to allow unfettered international assistance to reach people in need.

Nevertheless, we will continue to determine ways we can support the people of Venezuela during this humanitarian crisis, and we ask other nations to do the same.

Since FY 2017, we have dedicated over $152 million in humanitarian assistance to complement the generous efforts of countries in the region as they respond to the needs of newly arriving Venezuelans and to mitigate the effects of the crisis with food, health, and other emergency assistance.

Complementing this humanitarian assistance is another $43 million in economic and development funding.  This brings the total United States contribution to the regional response to over $195 million.

We also deployed the U.S. Naval hospital ship USNS COMFORT to the region to provide medical care to both Venezuelans and the communities hosting them.

Turning to more recent events, the United States also strongly condemns the recent raids by Maduro’s security services and the detention of Roberto Marrero, Chief of Staff to Interim President Guaido, and Luis Aguilar.  We call for their immediate release.

These arrests are just one more example of the former Maduro regime violating human rights in their desperate attempt to intimidate the legitimate democratic Guaido government.  They are betting on repression in a cynical attempt to hold onto power.  These arrests violate both of these core OAS principles, and we cannot stand by and let this happen.

On March 26, just yesterday, the United States hosted a panel on the margins of the Human Rights Council in Geneva denouncing Maduro’s use of violence, repression and intimidation against political opponents.

The United States will work with the OAS, the Lima Group and all of the supporters of Venezuelan democracy around the world to respond forcefully to these arrests.  There will be consequences for the actions of the former Maduro regime to repress democracy and violate human rights.

Mr. Chariman, we have often heard OAS member states and delegations speak eloquently about the importance of “non-interference” by foreign countries in the affairs of Venezuela.  OAS Member States have rightly emphasized that Venezuela should follow its constitutional process and the rule of law to maintain a democratic government.  We have heard that Venezuelans should decide the future of Venezuela.

It is in this spirit that I take the floor to strongly condemn the deployment of Russian aircraft and military personnel in Venezuela on March 23.  This deployment is a reckless escalation of a dangerous situation.  In addition, Russia is not alone.  Cuban military and intelligence officials have been propping up the Nicolas Maduro for years, and they have taken on an even a larger role now to protect the crumbling former regime.

Mr. Chairman, in contrast, the United States stands with the vast majority of countries in Latin America in supporting democracy in Venezuela, as expressed by the will of the people.  As the OAS Permanent Council has itself recognized, the National Assembly is the only democratic institution remaining in Venezuela.

In addition, the OAS General Assembly condemned the May 2018 Presidential election as lacking legitimacy and failing to meet international standards.  The OAS Permanent Council further decided not to recognize Maduro’s second term on January 10.

I call on all OAS Member States to vigorously protest the arrival of the Russian military personnel, and the continuing presence of Cuban agents in Venezuela.  These foreign military forces are unconstitutional, and they are only there to repress the legitimate aspirations of the Venezuelan people.

If OAS Member States truly support non-interference and the rule of law in Venezuela, now is the time to take a stand, and support the lawful and legitimate government of Venezuela, led by Interim President Juan Guaido. Thank you.

Following is the complete text of the resolution:

RECALLING that resolution CP/RES. 1095 of February 23, 2018, requested the Government of Venezuela to implement the measures needed to prevent a worsening of the humanitarian situation, including accepting the assistance offered by the international community;

CONSIDERING that the political, economic, social, and humanitarian crisis in Venezuela has contributed to the deterioration in the quality of life of its citizens and has generated unprecedented migration flows with regional implications, due to the lack of institutional capacity to meet basic needs such as the delivery of public and health services, as well as the supply of food and medicines;

NOTING with concern that Venezuela’s closure of its borders with Brazil and Colombia has in fact prevented the population, especially the most vulnerable, from obtaining food, medicines, medical treatment, and educational opportunities; and

REITERATING its serious concern about the collapse of Venezuela’s health care system, which has led to the reappearance of infectious diseases previously eradicated in Venezuela as well as in bordering countries and in the region,