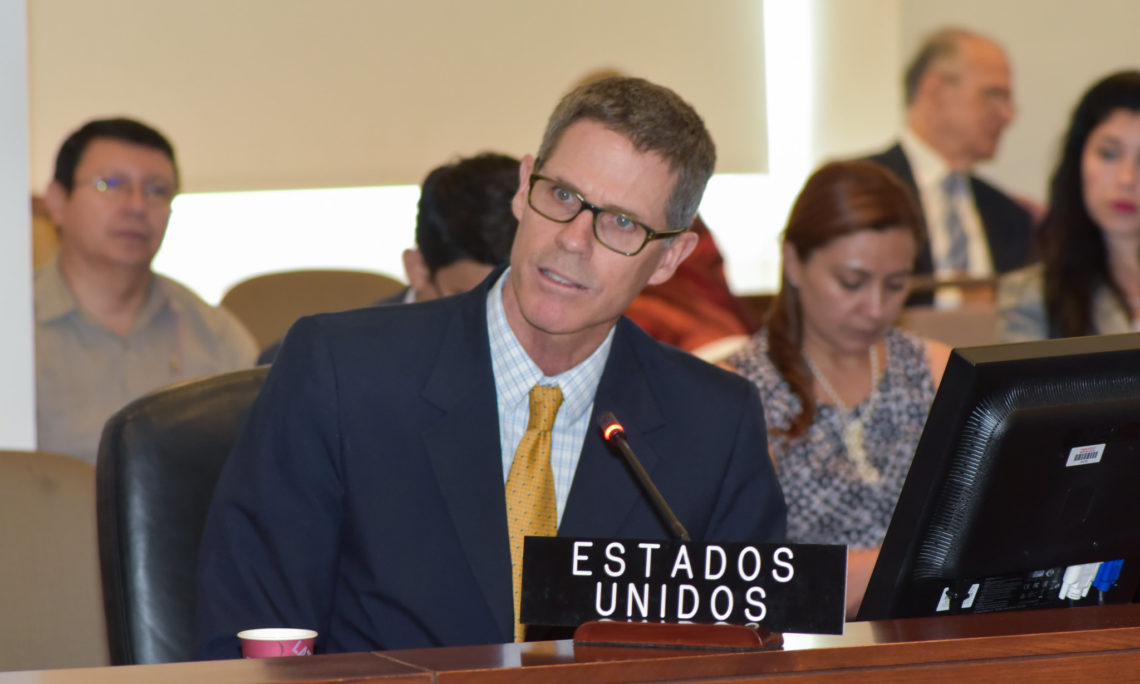 Madam Chair, we thank Canada for requesting this item on the agenda of today’s Permanent Council meeting, and for working with so many like-minded countries – including the United States – to present a resolution that we welcome and endorse.

Let me begin by recalling the importance of the July 4 report of the United Nations Office of the High Commissioner for Human Rights highlighting the human rights violations and abuses of the former Maduro regime. Among other things, it notes that Maduro’s security forces, including the Special Action Forces (FAES), killed 5,287 people in 2018 and an additional 1,569 by mid-May 2019, and that “many of these killings may constitute extrajudicial executions.”

The release of this report came at the (reported) killing and torture of Lieutenant Commander Rafael Acosta Arévalo, who died while in custody of the former Maduro regime.

Since the report’s release, there have been additional disturbing allegations concerning the Directorate General of Military Counterintelligence (DGCIM).

Madam Chair and fellow OAS colleagues: we cannot continue to allow these abuses to proceed without actions to hold the perpetrators accountable.

The violent violation and abuse of human rights as well as the continued deterioration of the Venezuelan humanitarian crisis highlights the urgency of finding a peaceful solution.

That is why multilateral fora such as the OAS exist. To propel collective action to hold the former Maduro regime accountable for implementation of the recommendations detailed in the UN report. This includes calls for: the former Maduro regime to dissolve FAES, dismantle and disarm pro-regime armed civilian groups called colectivos, and take immediate measures to halt human rights violations and abuses including torture and extrajudicial killings.

However, we must disagree with one of the High Commissioner’s recommendations – that the Maduro regime conduct investigations into human rights abuses it has committed.

The Maduro regime has co-opted security forces and the judiciary into doing its bidding, and those institutions cannot be trusted to effectively investigate, prosecute, or sanction human rights violators.

In fact, those same institutions have become tools for the violation of human rights. For that simple reason, it is important that the international community develop and implement effective mechanisms to establish accountability for the crimes committed by the Maduro regime.

Madam Chair, we also urge collective action to support members of Venezuela’s National Assembly, the country’s only remaining democratic institution, which the regime continues to repress.

National Assembly deputies have long been speaking out against the regime’s brutal tactics and themselves have been victims, with several in hiding, in detention, or in exile.

With these points in mind, the resolution before us today represents an important call to action – as it demands a truly independent investigation into the egregious human rights violations and abuses committed by the former Maduro regime.

We fail to see how the former Maduro regime could credibly investigate its own violations and abuses, and as a result, we support independent international investigations.

The United States also continues to support the ongoing monitoring work of the Inter-American Commission on Human Rights (IACHR) and the mechanisms it has established to support human rights and democratic governance in Venezuela.

We urge the full implementation of recommendations issued by the Inter-American Commission to the former Maduro regime on behalf of the people of Venezuela, and hope that it can soon return to Venezuela through its announced in loco visit– the first in over a decade.

Madam Chair, let me close by stressing that this resolution demands the former regime to allow the Inter-American Commission access so it can carry out its work, just as it does in numerous other OAS member states – including my own.

With recent UN and OAS efforts in mind, let us work together to ensure that this resolution is fully implemented – so we are able to support the people of Venezuela in their enduring quest for an immediate end to the terrible and violent acts of repression, and a restoration of democracy and dignity. Thank you, Madam Chair.

RESOLUTION ON THE HUMAN RIGHTS SITUATION IN VENEZUELA

(Adopted by the Permanent Council at its regular meeting of August 28, 2019)

RECALLING that the American Declaration of the Rights and Duties of Man and other applicable international instruments recognize that all human beings have the right to life, liberty, and security of person;

TAKING INTO ACCOUNT that the American Convention on Human Rights recognizes that every person has the right to have their physical, mental, and moral integrity respected, and that no one shall be subjected to torture or to cruel, inhuman, or degrading punishment or treatment, nor to illegal or arbitrary detention;

UNDERLINING that every person has the right to an adequate standard of living that assures him/her, as well as his/her family, health and well-being, and especially the necessary food, medical assistance and social services, in accordance with applicable international law on human rights;

TAKING INTO ACCOUNT that the United Nations High Commissioner for Human Rights (UNHCHR) released a report on the human rights situation in the Bolivarian Republic of Venezuela on July 4, 2019, in compliance with the mandate set forth in Resolution 39/1 of October 3, 2018 of the United Nations Human Rights Council, which confirmed, through detailed documentation, the perpetration of grave human rights violations in Venezuela; and

CONSIDERING that the regime leverages State institutions, through the excessive use of force and brutal practices, to repress peaceful demonstrations and to carry out extrajudicial executions, arbitrary detentions, and the mistreatment and torture of opponents and their families,

1. To firmly condemn the grave and systematic violations of human rights in Venezuela, including the use of torture, illegal and arbitrary detentions, extrajudicial executions, forced disappearances and the denial of the most basic rights and necessities, especially those related to health, food and education.

2. To demand an independent exhaustive and credible investigation that makes it possible to bring the perpetrators and masterminds of the human rights violations to justice.

3. To reaffirm the importance of the immediate and full implementation of the recommendations contained in the report from the United Nations High Commissioner for Human Rights, including to investigate human rights violations and to halt the use of excessive force, extrajudicial executions, and torture.

4. To demand immediate and unhindered access for the Inter-American Commission on Human Rights to Venezuela.

5. To foster the strengthening of cooperation between the Inter-American Commission on Human Rights and the United Nations Office of the High Commissioner for Human Rights to monitor the human rights situation in Venezuela.