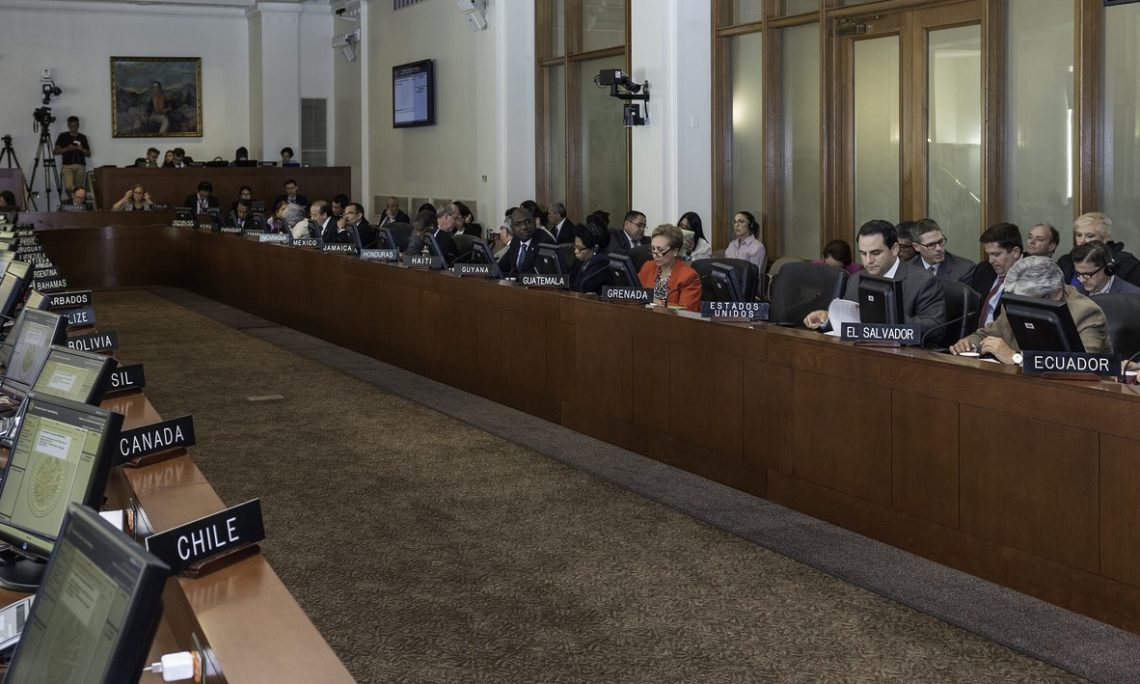 On September 12, 2018, the OAS Permanent Council adopted a resolution condemning the acts of violence, repression and human rights violations and abuses committed against the people of Nicaragua by the Ortega government. Ambassador Carlos Trujillo addressed the Council. (OAS Photo)

Thank you Madam Chair for convening another Special Session of this Council.  Our Organization has a responsibility to remain engaged and respond to the situation in Nicaragua — which has shifted to a campaign of intimidation and threats against the government’s perceived opponents.

The efforts of our Council’s new Working Group on Nicaragua, led by Canada and Chile, are essential for supporting a coordinated and efficient response on the part of the OAS.

With this in mind, the United States welcome today’s timely report on the Working Group’s efforts, and are proud to be an active member of the Group.

Unfortunately, Madam Chair, the situation continues to worsen in Nicaragua.  This despite the growing international condemnation of the ongoing, government-sanctioned violence and intimidation campaign against the Nicaraguan people.

The United States condemns in the strongest possible terms the ongoing attacks and arbitrary detentions by President Daniel Ortega’s para-police forces against university students, journalists, and clergy across the country, and threats against those who support them.

We also condemn the Ortega government’s recent arbitrary detention of six prominent student members of the National Dialogue.  These students are the latest example of the thousands of citizens who are peacefully and democratically protesting government actions, only to be harassed, detained, disappeared, or even killed.  These actions represent the Ortega government’s aims to criminalize all forms of dissent.

Five of these students have been released.  We call for the release of all arbitrarily detained persons, Madam Chair.  We also call on the Ortega government to ensure the safety of all who choose to exercise their universal rights to freedom of speech and freedom of assembly.

It is therefore within this context that we meet again today to raise our concerns, and reaffirm our shared commitment to work together to assist Nicaragua overcome an increasingly dire situation.

The world’s eyes remain focused on how the international community – including through the UN and the OAS – is responding to the crisis in Nicaragua.

We took an important step forward in the resolution adopted by this Council last month by establishing a Working Group on Nicaragua.  That Working Group is now actively engaged in assessing developments in Nicaragua.

As we noted when this group was established, only a strong, internationally-backed mechanism can help prevent a further escalation of violence there and create better conditions for Nicaragua-led solutions.

Madam Chair, despite the Nicaraguan government’s cynical efforts to disguise the truth, ongoing violence and repression continues from government forces and government supporters.  They are attacking religious leaders, including those whom the government earlier invited to mediate the current conflict, as well as students and other ordinary citizens exercising their right to protest.

We know this because the UN Office of the High Commissioner for Human Rights, which the Nicaraguan government has now expelled from the country, and the Inter-American Human Rights Commission have documented this reality in great detail, based on eyewitness accounts and recordings.

Church leaders, independent media and other credible observers, including many of our own diplomatic missions, have also confirmed this grim reality.

With these experiences in mind, Madam Chair, we as member states must reaffirm clearly and unequivocally that violators and abusers of human rights must be held accountable.

We must also underscore continued support for engagement and monitoring on the part of the OAS and its relevant entities.  To this end, we call on the Nicaraguan government to heed the Nicaraguan people’s urgent call for democratic reforms.

In this context, the United States believes the National Dialogue, established with the mediation of the Nicaraguan Council of Bishops, offers an invaluable opportunity to agree on steps that will advance peace and respect the will of the Nicaraguan people.

The United States therefore continues to support the proposal for early, free, fair, and transparent elections made by Nicaragua’s broad-based Civic Alliance, as part of the National Dialogue process.

Let me be quite clear — early elections represent the only viable path back to democracy and full respect for human rights in Nicaragua.  The OAS has an important role to play in this regard if there is any political will on the part of the Ortega government to implement the recommendations of the 2017 OAS electoral mission.

Let me close Madam Chair by noting that all governments should promote democracy, good governance, and human rights for the greater welfare of their citizens.  The United States will continue to stand by the people of Nicaragua and hold the Ortega government to account for its repression and violence.

It is for all of these reasons that we urge the Council to adopt the resolution before us today.  This text reaffirms our collective concern over the deteriorating state of democratic practice in Nicaragua.

It also makes clear that we – as member states of the OAS and also of the UN – seek a peaceful return to inclusive dialogue and proactive OAS engagement, in order to prevent further violence and promote a peaceful solution to this ongoing crisis.

Such action is fully in line with the commitments all of us have freely undertaken as OAS member states.

(Adopted by the Permanent Council at its special meeting
of September 12, 2018)

BEARING IN MIND the principles enshrined in the Charter of the Organization of American States, the Inter-American Democratic Charter, the American Declaration on the Rights and Duties of Man, the American Convention on Human Rights, of which Nicaragua is a state party;

RECALLING Article 1 of the Inter American Democratic Charter which states that the peoples of the Americas have a right to democracy and their governments have an obligation to promote and defend it and that democracy is essential for their social, political, and economic development;

REAFFIRMING the Declaration of Support for the People of Nicaragua [AG/DEC. 97 (XLIII-O/18)], adopted by the OAS General Assembly on June 5, 2018;

TAKING NOTE of the Council’s resolution CP/RES. 1108, “The Situation in Nicaragua,” of July 18, 2018, in which the Inter-American Commission on Human Rights (IACHR) was invited to keep the Permanent Council informed as to the functioning of the mechanisms specifically established by the IACHR to monitor the human rights situation in Nicaragua and the follow-up of the implementation of recommendations contained in the report of the IACHR, and which requests the IACHR and the OAS Department for Electoral Cooperation and Observation (DECO), the United Nations High Commissioner for Human Rights, the OAS Secretary General and the European Union to support the work of the Verification and Security Commission;

TAKING NOTE ALSO of the Council’s resolution establishing the “Working Group on Nicaragua,” CP/RES.1109 (2175/18) of August 2, 2018, whose mandate is to contribute to the search for peaceful and sustainable solutions to the evolving situation in Nicaragua, including through consultations with the Government of Nicaragua;

UNDERSCORING the importance of the work being conducted by entities such as the IACHR and the United Nations Office of the High Commissioner of Human Rights in that country, and OAS member states’ collective commitment under Article 8 of the Inter American Democratic Charter to strengthen the inter-American System for the protection of human rights and the consolidation of democracy in the Hemisphere;

TAKING NOTE of the informational session of the United Nations Security Council regarding “Cooperation between the United Nations and regional organizations in the maintenance of peace and security, the situation in Nicaragua,” held on September 5, 2018; and

TAKING NOTE ALSO of the joint statement of the Working Group on Nicaragua of the Permanent Council and the OAS Secretary General, of August 31, 2018,

1. To reaffirm its strong condemnation regarding acts of violence, repression and human rights violations and abuses committed by police, parapolice groups and others against the people of Nicaragua documented in the recent reports of the IACHR and the United Nations Office of the High Commissioner of Human Rights.

2. To urge the Government of Nicaragua to take immediate steps to investigate the violations and abuses documented in those reports and take effective steps to bring the perpetrators to justice and grant reparations to victims where appropriate, in a framework respectful of rule of law.

3. To urge the Government of Nicaragua to comply with its commitment to facilitate and provide necessary assistance to the IACHR and specifically with the Special Follow-up Mechanism for Nicaragua (MESENI) and the Interdisciplinary Group of Independent Experts (GIEI) by giving them access to and providing them with information necessary for the proper implementation of their mandates; the same to be granted to with the relevant departments of the OAS General Secretariat including the Department of Electoral Cooperation and Observation (DECO).

4. To express its deep concern over the decision of the Government of Nicaragua to withdraw the invitation to the Office of the United Nations High Commissioner for Human Rights, and urge it to re-establish cooperation with that Office so that it can continue with its constructive work in that country.

5. To call for the development of conditions allowing for the re-establishment of a committed dialogue in good faith between the parties, and to urge the Government of Nicaragua to support an electoral calendar jointly agreed to in the context of the National Dialogue process.

6. To express its regret over the refusal of the Government of Nicaragua to cooperate with the Permanent Council and its Working Group and to urge it to reconsider this decision with a view to seeking peaceful and sustainable solutions to the situation in Nicaragua.

7. To call upon Member and Observer States to implement, in accordance with their respective legal frameworks and applicable international law, appropriate diplomatic measures to assist in the restoration of rule of law and the protection of human rights in Nicaragua.

8. To express the willingness of the Permanent Council to continue monitoring the situation in Nicaragua and consider all possible measures in order to support the search for peaceful and effective solutions to the crisis faced in Nicaragua.