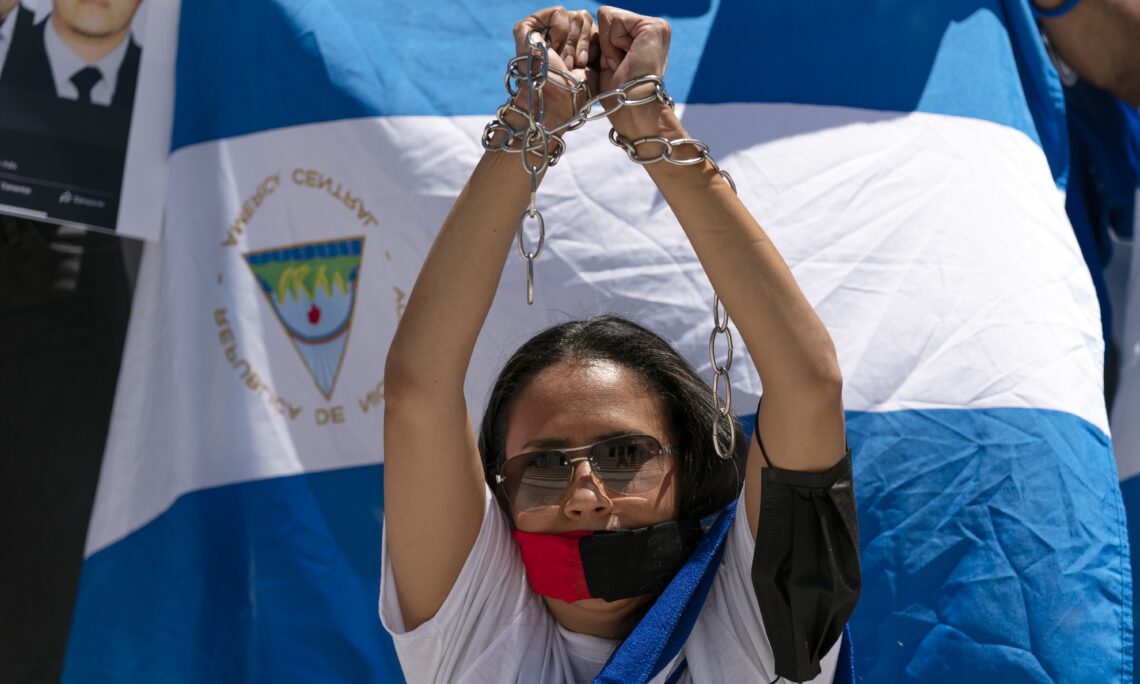 Pro-democracy advocates rally outside of the Organization of the American States to condemn the Ortega regime crackdown in Nicaragua, and demand the freedom of political prisoners and a stop to the government's human rights violations against critics, June 23, 2021. (AP Photo)

Remarks by
Bradley A. Freden
Interim Permanent Representative of the United States
December 8, 2021

Thank you, Chair.  We would like to thank all the OAS delegations that voted in favor of this resolution today.  The United States believes this resolution sets a clear path for Nicaragua to return to democracy and respect for human rights.

The region and the international community must continue to stand together with the Nicaraguan people in support of their right to freely choose their representatives.

Nicaragua joined the Charter twenty years ago, through which we all resolved that the peoples of the Americas  have a right to democracy, and their governments, including the Nicaraguan government, have an obligation to promote and defend it.

The Ortega-Murillo government has failed to honor this commitment by holding an election on November 7 devoid of credibility, by silencing and arresting opponents, and, ultimately, by taking actions to establish an authoritarian family dynasty unaccountable to the Nicaraguan people.

Today, we, OAS member states, have again spoken out clearly in defense of democracy and human rights in Nicaragua.

We urge steadfast and continued focus on the situation and believe the resolution today is a good start to bring democracy back to the people of Nicaragua.

We repeat our urgent call for the Nicaraguan government to change course and allow the Nicaraguan people to fully exercise their rights — including the right to freely elect their leaders.

It can begin by welcoming the further diplomatic outreach that this resolution proposes.

We along with other delegations look forward to the Secretary General’s upcoming report on this issue.  We must be ready to support substantive productive engagement on democratic solutions to this institutional crisis; we must be equally ready to respond if we see a continued refusal to engage.

Mr. Chairman, it is essential that the OAS remain seized by this issue.  We cannot abandon a country or a people with a brave history of defending their rights and ideals.  Nicaraguans have not given up on their democracy, and we can’t either.

My government looks forward to working with OAS member states, as well as many other democratic governments around the world, to address this breakdown in democratic rule.

We call on Nicaragua to immediately release all political prisoners.

President Ortega and Vice President Murillo still have an opportunity to put Nicaragua on a better path.  We urge them to accept the proposals as laid out in this resolution.

Read Full Text of the Resolution