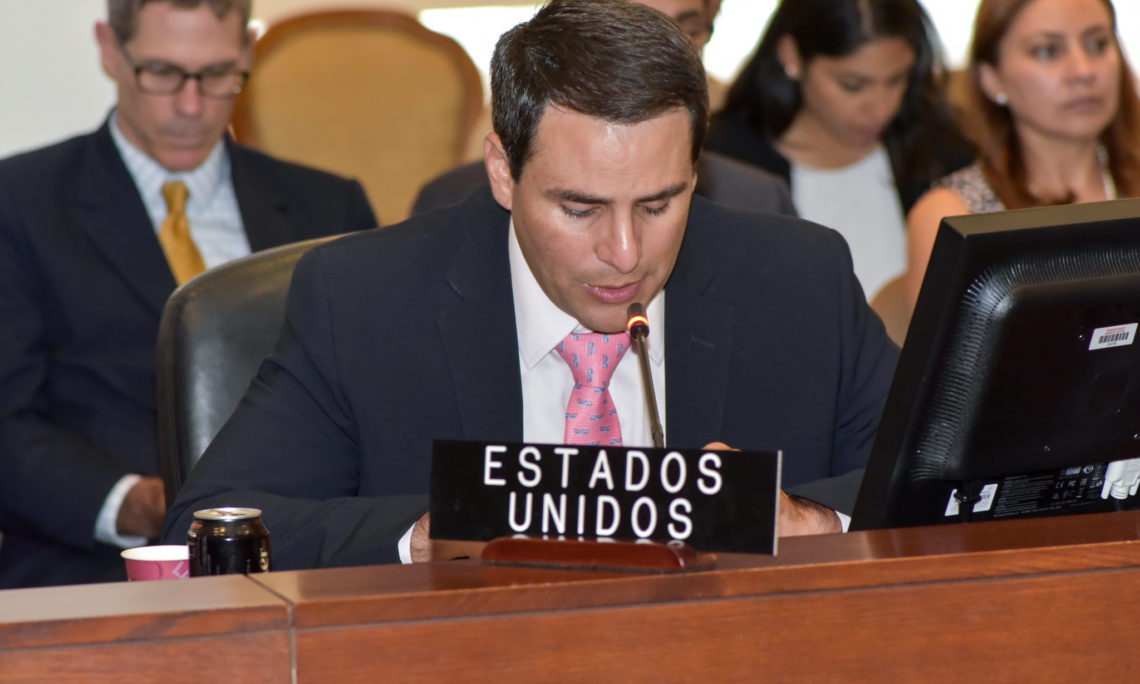 Madam Chair, Mr. Secretary General: the OAS and the OAS Member States have been enormously patient in pressing the Ortega regime to meet its commitments under the Inter-American Democratic Charter and its promises to the opposition Civic Alliance to conduct effective dialogue.

We would like to thank Canada and Chile for co-chairing the Nicaragua Working Group, which has held dozens of meetings with civil society and various experts, and has made five reports to the OAS Permanent Council calling for action.

We also want to thank both delegations for placing this item on today’s Council agenda.

Madam Chair, the OAS has held multiple Permanent Council meetings over the past year, heard reports from Secretary General Almagro, the Inter-American Commission for Human Rights, and outside legal experts. We have heard exhaustive expert testimony.

For its part, the working group has repeatedly asked to travel to Nicaragua on a fact-finding trip, and has asked the government of Nicaragua to cooperate or otherwise provide any evidence. The Nicaraguan Government has refused any cooperation, stonewalling all requests.

In fact, at no time has the Nicaraguan government or its defenders ever offered any independent expert to deny the mountain of evidence accumulated through the Working Group, the MESENI, the Interdisciplinary Group of Independent Experts, or the Permanent Council. Instead, it has only replied with uncorroborated, political rhetoric aiming to mislead the international community.

As stressed in Medellin at our recent General Assembly, the United States continues to hope for a political solution through dialogue, but the Ortega government continues to balk at every turn, lacking good faith while cynically playing for time.

Colleagues, although we all may hope for and support dialogue, we must also be realistic about what is happening in Nicaragua.

It is time to recognize that the government of Nicaragua is violating all of the essential elements of democracy, from free and fair elections and separation of powers to basic rights and the rule of law, as articulated in Article 3 of the Inter-American Democratic Charter.

The Ortega government’s continuing threats and intimidation campaign against perceived opponents constitute a direct infringement upon the “right and responsibility of all citizens to participate in decisions relating to their own development,” as also articulated in the Democratic Charter.

To this end, the United States continues to support the Civic Alliance of Nicaragua in its efforts to represent the interests of Nicaraguans advocating for freedom, justice, democracy, and change.

No one should be fooled by the Ortega regime’s maneuvers to unilaterally impose cosmetic changes to the electoral system. Consistent with the Medellin resolution, only through dialogue with legitimate representatives of Nicaragua’s civic opposition can credible, consensual reform be achieved.

Madam Chair, as was made very clear during our last three Special Council sessions, the OAS needs to act expeditiously on the compelling evidence that the Constitutional Order in Nicaragua has been unconstitutionally altered in a manner that seriously impairs democratic order.

The government of Nicaragua’s lack of justice, due process, transparency, and respect for fundamental freedoms has also impeded good faith efforts at dialogue and reconciliation.

The Nicaraguan government has made clear, most recently in its letters to the OAS envoy and the Papal Nuncio in late July, that it is not willing to engage in good faith with opposition representatives in negotiations on a political solution.

We now need to acknowledge that enhanced and stronger diplomatic pressure is required for the Ortega government to negotiate seriously. We all want a restoration of democracy in Nicaragua, and the United States hopes that the resolution before us today establishing a high level commission will help bring us closer to this goal.

With this in mind, Madam Chair, the United States is pleased to support this resolution calling anew for the restoration of democracy in Nicaragua through the good offices of the OAS.

RESOLUTION ON THE APPOINTMENT OF A COMMISSION ON NICARAGUA

(Adopted by the Permanent Council at its regular meeting of August 28, 2019)

1. In compliance with operative paragraph 5 of resolution AG/RES. 2943 (XLIX-O/19), to appoint a Commission to carry out diplomatic efforts at the highest level to seek a peaceful and effective solution to the political and social crisis in Nicaragua. This Commission would be comprised of the following members:

2. To instruct the Commission to submit a report within a maximum of 75 days.