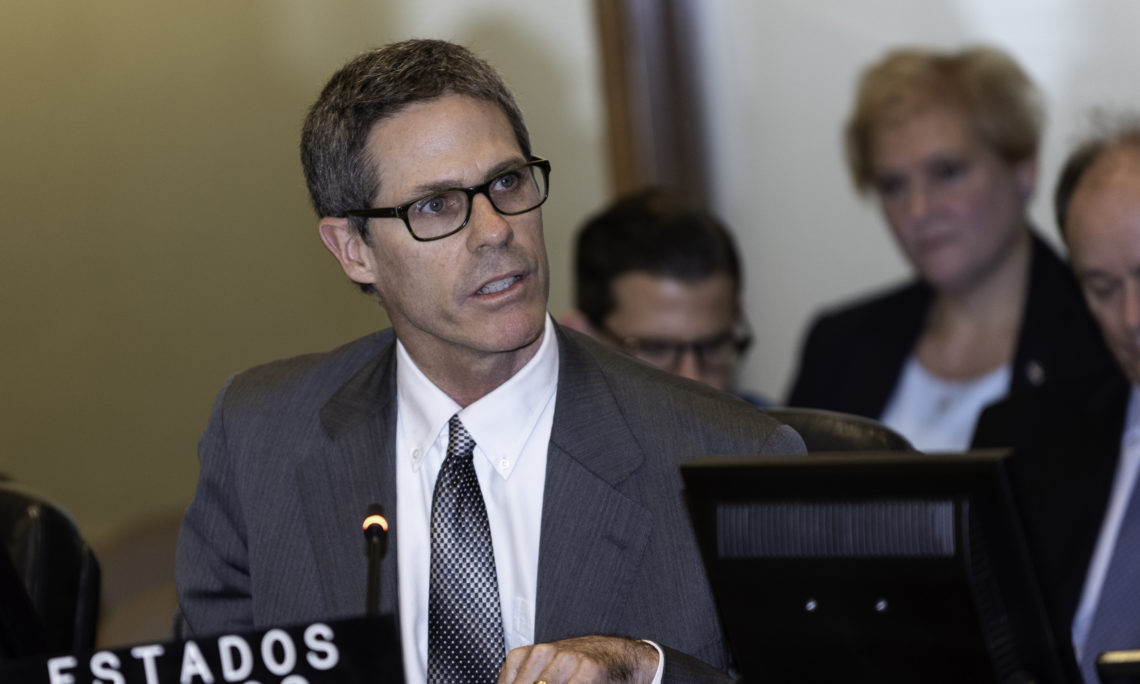 On April 26, 2019, the OAS Permanent Council held a special meeting to address the unconstitutional alteration of the constitutional regime and interruption of the democratic order in Nicaragua, and calling for further OAS action toward the collective defense of democracy in Nicaragua consistent with the terms of the Inter-American Democratic Charter. The meeting included presentations by: Mr. José Pallais – Former Deputy Minister of Foreign Affairs of Nicaragua; Mr. Ruben Perina – Adjunct Professor, George Washington University; Mr. Harold Rocha – President, Nicaraguan-American Center for Democracy and Former Faculty Fellow/Visiting Professor, University of Iowa College of Law; Ms. Haydee Castillo Flores – President of the Leadership Institute of Las Segovias, and of the Women’s Forum for Central American and Caribbean Integration, and Member of the Political Council of the Unidad Nacional Azul y Blanco (Nicaragua); and Mr. Jaime Aparicio – Former President of the Inter-American Juridical Committee and former chief of Electoral Observation Mission in Nicaragua (Carter Center).

Our speakers this morning made a clear and compelling case that the Constitutional Order in Nicaragua has been unconstitutionally altered in a manner that seriously impairs the democratic order in that state. Indeed, the Ortega government’s attack against the Constitutional order has been ongoing for years; we see the results clearly today.

The Ortega government’s ongoing threats and intimidation campaign against perceived opponents constitute an infringement upon the “right and responsibility of all citizens to participate in decisions relating to their own development,” as articulated in the Democratic Charter.

To reiterate some of the themes raised by panel members and enumerate an illustrative listing of Government actions that have severely undermined the foundation of Nicaraguan democracy:

1) using the judicial branch to cover up crimes by the regime and its allies, instead of investigating and prosecuting those responsible for hundreds of killings during recent protests;

3) building a national assembly supermajority through fraudulent elections and the systematic, illegal dissolution of opposition parties and ejection of their legislators from the assembly – a supermajority that violates its own rules and procedures and the constitutional principles of checks and balances to servilely execute the orders of the head of government;

5) refusing to invite and accredit credible domestic and international observers for elections;

7) subjecting non-governmental organizations and other members of civil society to increasing political and legal pressures – including their illegal dissolution and the state-sanctioned physical abuse, arrest, deportation, and forcible exile of their staffs;

8) inciting organized violence against members of the political opposition and civil society who attempt to peacefully protest government actions, also noted in statements by the Inter-American Commission on Human Rights and prosecution of those who have engaged in peaceful dissent; and

9) deploying Nicaraguan National Police and ununiformed proxies to attack and even kill hundreds of citizens exercising their constitutional rights.

These actions, combined with others such as last year’s expulsion of the Inter-American Commission’s monitoring mechanisms – the Independent Group of International Experts (GIEI) and the Special Monitoring Mechanism (MESENI) – provide clear evidence of the Nicaraguan regime’s wanton disregard for international mechanisms designed to promote human rights, rule of law, and democratic practice.

Indeed, the GIEI December report credibly documents extensive, systematic abuses, clearly ordered by the regime, during the months of April and May 2018 alone.

Regarding Nicaragua’s national dialogue process, words and agreements mean nothing without clear action, concrete results and changed behavior. President Ortega has already agreed to release all political prisoners and respect freedoms of expression and peaceful assembly, as well as other human rights.

The Nicaraguan government’s actions – and inaction — speak clearly. It needs to respect its own constitution and release immediately and unconditionally the hundreds of political prisoners it is holding now. This means complying with the agreements it has signed so far in the dialogue.

Instead it uses the prospect of dialogue as one more tool to delay accountability and maintain control.

The United States will continue – directly and with international partners – to urge the Ortega government to respect basic democratic processes and institutions, and act consistent with the provisions of the Democratic Charter.

The United States continues to support the Civic Alliance of Nicaragua in its efforts to represent the interests of Nicaraguans advocating for freedom, justice, democracy, and change.

We also call on the government to allow the return of GIEI and MESENI. These mechanisms are needed in Nicaragua now more than ever.

Moreover, they will be absolutely essential if the OAS is to serve as any credible guarantor for the electoral reform that must be part of any national dialogue agreement.

Governments and non-governmental organizations the world over have raised their voices of concern about the systematic dismantling of Nicaraguan democracy.

The OAS, the organization most firmly committed to – and most fully responsible for — the defense of democracy in the Western Hemisphere, must also support them in denouncing the Nicaraguan governments’ actions, and setting clear expectations for the collective defense of democracy as reflected in the Inter-American Democratic Charter.

The United States supports SYG Almagro’s January call for action consistent with the terms of the Inter-American Democratic Charter.

The time for action is now.