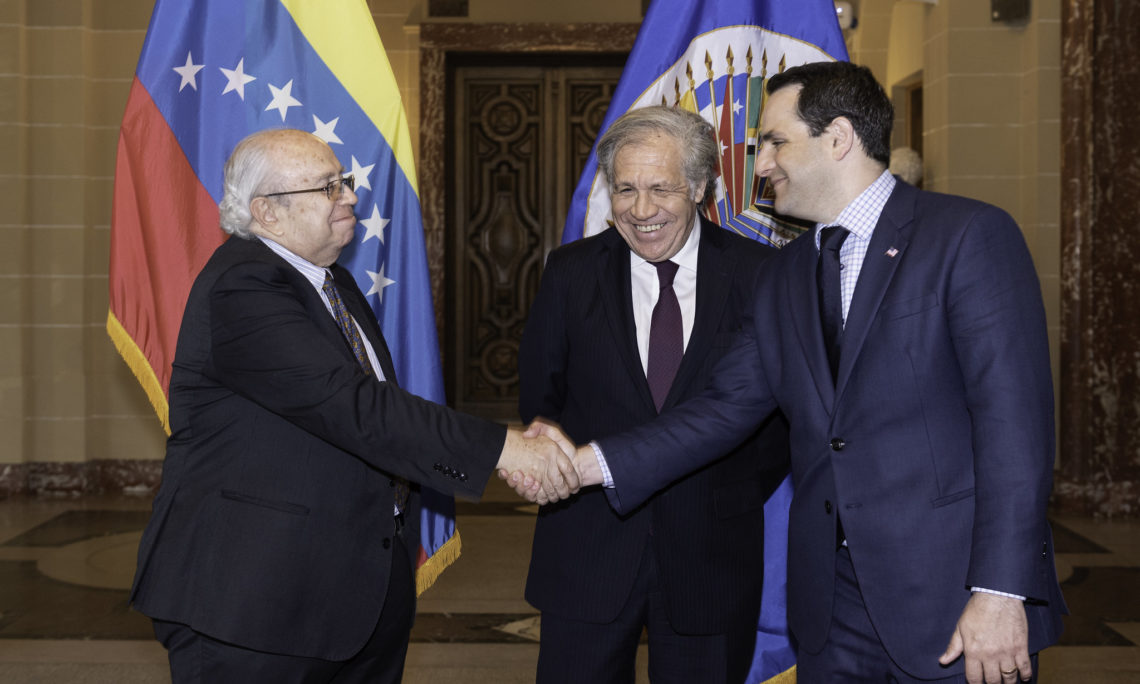 The new Permanent Representative of Venezuela to the Organization of American States (OAS), Gustavo Tarre, presents his credentials to Secretary General Almagro in a ceremony at OAS headquarters, April 10, 2019. (OAS Photo)

On April 10, 2019, the new Permanent Representative of Venezuela to the Organization of American States (OAS), Gustavo Tarre, presented his credentials to Secretary General Almagro of the hemispheric institution, Luis Almagro in a ceremony at OAS headquarters.  Ambassador Trujillo participated in the ceremony as Chair of the OAS Permanent Council.

Secretary General Almagro welcomed Ambassador Tarre, “with whom we will work to deepen the path to democratization, peace and justice for Venezuela.” He also recalled that, at the meeting of the OAS Permanent Council on April 9, “the voices in favor of democracy in the hemisphere” voted for the resolution that accepted his appointment.

For his part, Ambassador Tarré highlighted the commitment of Secretary General Almagro and member states of the OAS for the freedom of his country, and the step taken by the Permanent Council in recognizing him in his post. “Yesterday the usurpation ended with regard to the chair of Venezuela, now we will work for a transition government and free elections,” he added.

Ambassador Tarre will represent his country pending new free, fair and democratic elections and the appointment of a democratically elected government.

Today, as president of the #OAS Permanent Council, I had the honor of welcoming @tarrebriceno at a ceremony to present his credentials as the permanent representative of Venezuela, a historic milestone for our region and the restoration of Venezuelan democracy.#EstamosUnidosVE pic.twitter.com/RlzSxwhMyb