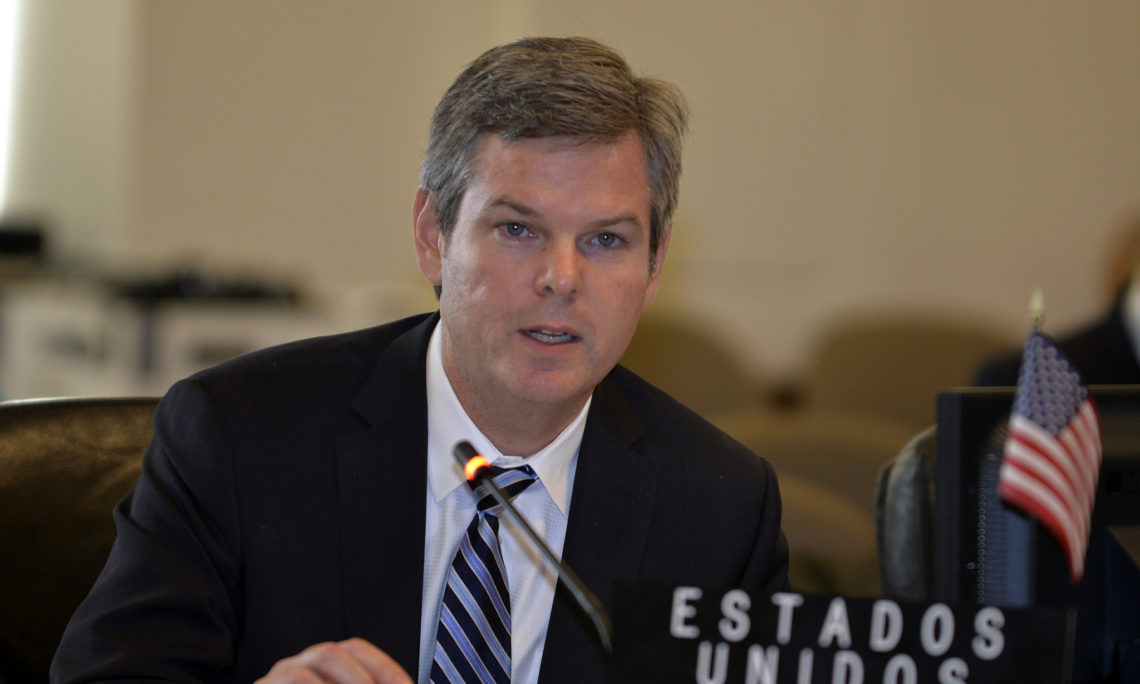 Mr. Chairman, I am pleased to take the floor — along with the governments of Argentina, Canada, Costa Rica, Peru, Jamaica, and Guatemala — in recognition of the International Day of Democracy which occurred last week on September 15th.

The theme of this year’s commemoration is “ Democracy and the 2030 Agenda for Sustainable Development,” which speaks to the importance of encouraging and supporting the participation of our region’s citizens in decisions regarding sustainable and democratic development.

This theme also reflects the importance of empowering our citizens to transform common interests into actions that serve the common good — from social justice to government accountability to entrepreneurship and innovation.

At the same time, Mr. Chairman, it is also important to recognize that democracies flourish when they are connected to and supported by other democracies. We are seeing this in our region through the work of the OAS — and also through our leadership in the Community of Democracies and our efforts in the Open Government Partnership.

It is especially fitting to commemorate the International Day of Democracy here at the OAS, as we also mark this month the fifteenth anniversary of the adoption – by consensus – of the Inter-American Democratic Charter.

During the past decade and a half, Mr. Chairman, democracy has continued to deepen in most of our hemisphere.  This is a significant achievement and a source of pride to our citizens, and we are collectively committed to working — through the OAS and the 2030 Agenda for Sustainable Development — on the many challenges that still remain.

Indeed, in adopting the Democratic Charter, we all agreed — and I quote —that “the peoples of the Americas have a right to democracy and their governments have an obligation to promote and defend it.”

Mr. Chairman, advocacy for democracy in international organizations like the OAS can generate conflict and discord in the moment, along with charges of interference in internal affairs.  As a result, it can make for some uncomfortable moments.  But when democratic change eventually comes, as it has in so many countries, expressions of gratitude often follow from those whose democracies, and in some cases lives, have been saved with help from the international community.

Such actions underscore the importance of commitments we have each undertaken to speak out — not against any particular persons or parties, but in favor of common ideals and the institutions designed to defend and promote them.  As the late, great Elie Wiesel reminded us all: “We must take sides.  Neutrality helps the oppressor, never the victim.  Silence encourages the tormentor, never the tormented.”

To this end, Mr. Chairman, the United States remains a committed partner and supporter of OAS efforts to better promote and support democracy throughout the Americas.  We can be proud that our Democratic Charter serves as an example for democracy activists across Africa, Asia, and elsewhere.

At the same time, we know even democratically-elected governments can threaten democracy, if they do not respect its safeguards, institutions, rules, and values.

Nowhere are such efforts more relevant today than in the case of Venezuela.  The United States remains committed to working with all OAS member states to advance meaningful dialogue in Venezuela.

Mr. Chairman, we strongly support the Venezuelan people’s right to use constitutional mechanisms to express their will in a peaceful and democratic manner, including through a fair and timely recall referendum.

Similarly, we are concerned by the actions of the Nicaraguan government and Supreme Court to limit democratic space in advance of presidential and legislative elections in November.

We strongly urge the Nicaraguan government to create a more open environment for free and fair elections that will allow the Nicaraguan people to determine the future of their country.

At the same time, we welcome the ongoing engagement of the Permanent Council and regional leaders regarding the situation in Venezuela and Nicaragua, and we fully endorse the OAS playing a supportive role on the way forward.

Mr. Chairman, as we celebrate our hemisphere’s embrace of democracy today, we must also renew our shared commitment to do more to deepen and defend it, including through upcoming electoral observation missions in Haiti, Colombia and the United States.

Let me quite clear on this point:  There remains much to be done to fully translate the Democratic Charter’s vision into common action. We strongly agree with the Secretary General, who noted just this week that, “We all have a unique commitment in our hemisphere: to protect democracy and human rights. That’s our duty.”

Mr. Chairman, we thank you for including this item on the agenda of today’s Council meeting, and we welcome further discussion of our proposal to review pending recommendations related to the Democratic Charter within this Council.