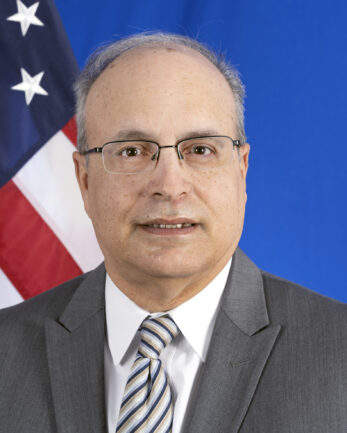 Frank Mora, Ph.D., was sworn in as U.S. Ambassador to the Organization of American States on December 30, 2022.

Prior to his current position, he was Professor of Politics and International Relations and Senior Researcher at the Jack D. Gordon Institute for Public Policy at Florida International University (FIU). From 2013 to 2020, Ambassador Mora served as Director of the Kimberly Green Latin American and Caribbean Center at FIU. Prior to arriving at FIU, he served as Deputy Assistant Secretary of Defense for the Western Hemisphere from 2009–2013. He has held several teaching positions, including Professor of National Security Strategy and Latin American Studies at the National War College, National Defense University (2004–2009), and Associate Professor and Chair in the Department of International Studies, Rhodes College (2000–2004).

During the last twenty years Ambassador Mora worked as a consultant to the Library of Congress, the Institute for National Security Studies (INSS), the National Democratic Institute, the U.S. State Department, the Organization of American States, and U.S. Southern Command. He has spoken at numerous conferences in the United States, Latin America, and Europe. His opinion pieces and other commentaries have appeared in U.S. and Latin American media outlets.

Ambassador Mora is a recipient of the Office of the Secretary of Defense Medal for Exceptional Public Service, Department of Defense (2012). In 2022, he was confirmed by the Senate as the Permanent Representative of the United States to the Organization of American States, with the rank of Ambassador.