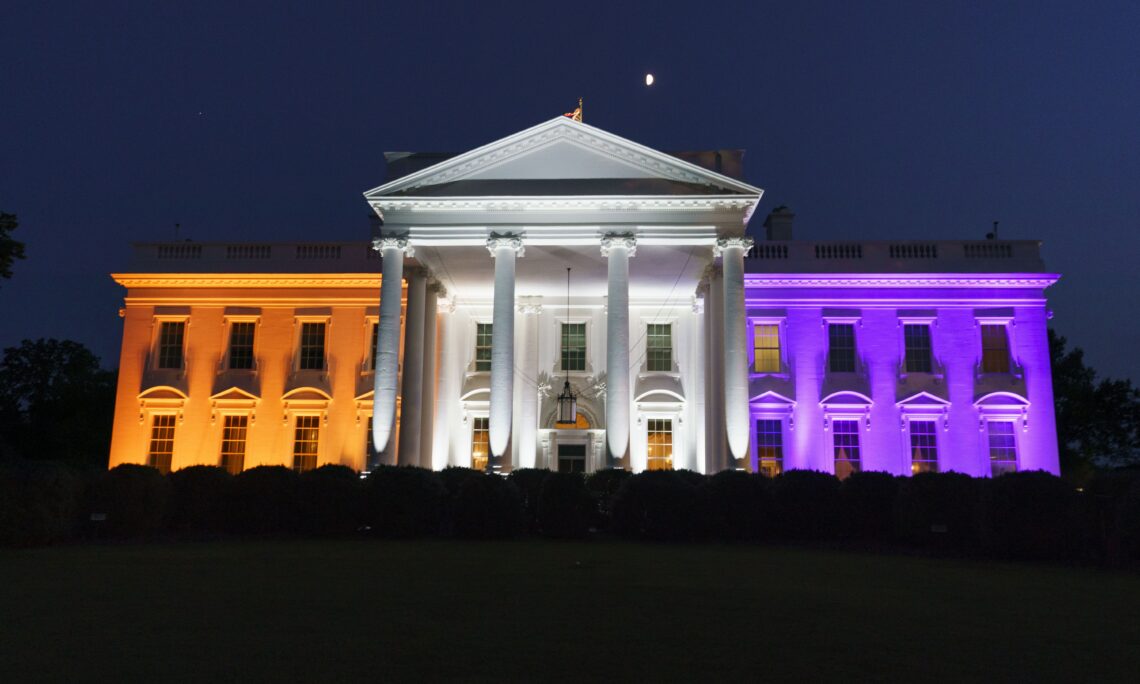 The White House is lit with purple and gold light to celebrate 100 years of the 19th Amendment and women's constitutional right to vote, Wednesday, Aug. 26, 2020, in Washington. (AP Photo/Alex Brandon)

Remarks by
Bradley A. Freden
Deputy Permanent Representative of the United States
September 16, 2020

Mr. Chairman, the equal opportunity of women in every facet of daily life is an essential feature of a free and prosperous society.

With this in mind, I take the floor this afternoon to recall the centennial anniversary of the ratification of the 19th Amendment to the U.S. Constitution, guaranteeing women the right to vote.

Passed by the U.S. Congress on June 4, 1919, and ratified on August 18, 1920, the 19th Amendment changed our Constitution and the face of the United States electorate forever.

Achieving this milestone, Mr. Chairman, required a lengthy and difficult struggle. Women and their supporters refused to give up. Though victory took decades of relentless effort, women knew that the right to vote was essential to exercising the full rights of their citizenship.

Beginning in the mid-19th century, several generations of woman suffrage supporters lectured, wrote, marched, lobbied, and practiced civil disobedience to achieve the right to vote. Few of the early supporters lived to see final victory in 1920, but their persistence inspired and paved the way for those who came after them.

By 1916, almost all of the major suffrage organizations were united behind the goal of a U.S. constitutional amendment. When New York State adopted woman suffrage in 1917 and President Woodrow Wilson changed his position to support an amendment in 1918, the political balance began to shift.

On May 21, 1919, the U.S. House of Representatives passed the amendment, and two weeks later, the Senate followed. When Tennessee became the 36th state to ratify the amendment on August 18, 1920, it passed its final hurdle of obtaining the agreement of three-fourths of the states. Secretary of State Bainbridge Colby certified the ratification on August 26, 1920.

As a result, Mr. Chairman, voting rights were expanded to millions of women.

A century after passage of the 19th Amendment, more women are serving in our Congress today than at any time in our history. However, much work remains to be done to ensure full equality for all women in the United States and throughout the hemisphere .

We recognize that promoting women’s equality and economic empowerment abroad enables developing countries to grow their economies and strengthen their institutes.

That is why President Trump signed a National Security Presidential Memorandum to launch the Women’s Global Development and Prosperity Initiative (W-GDP), which is the first-ever whole-of-government approach to advancing women’s economic empowerment globally .

Mr. Chairman, my delegation also expresses gratitude for the countless women who continue to strengthen our families, communities, and workforce in the face of the ongoing COVID-19 pandemic – in the United States and around our hemisphere.

With respect to the Inter-American System, the United States acknowledges the accomplishments of the Inter-American Commission on Women (CIM) since the Commission’s establishment at the 1928 International Conference of American States in Havana, a time when only one OAS member state had then recognized women’s right to vote.

We continue to support collaboration with the CIM to achieve the core objectives for which it was created.

In closing, Mr. Chairman, the United States looks forward to continuing our efforts with the OAS and fellow member states to support women — and men — who still cannot exercise such basic human rights as the right to vote in free and fair elections and participate in government.