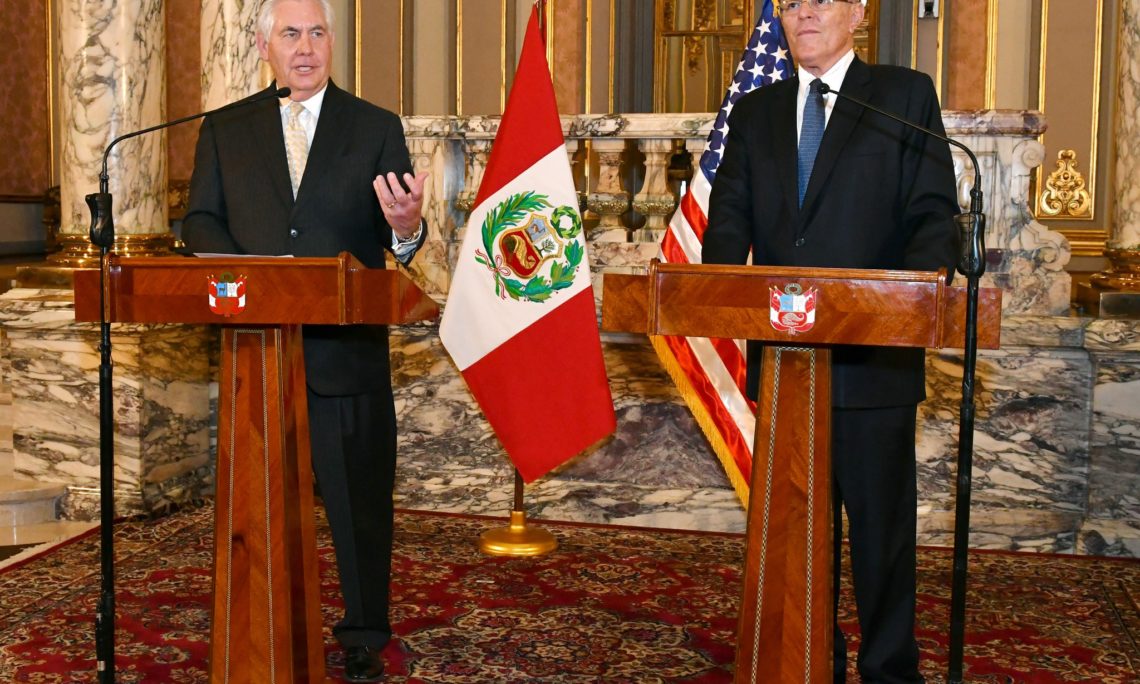 SECRETARY TILLERSON: Well, first let me thank President Kuczynski for allowing me to come by and call on him and for our meeting this morning. This is really a very strong bilateral relationship that exists between the United States and Peru. We talked about a number of areas of cooperation between the United States and Peru, both in terms of security measures but also economic and trade, and how to strengthen democracy in this part of the world – so important to both of us. We are committed and we appreciate the strong support that Peru has given the United States and the international community in pushing back on North Korea’s nuclear weapons program. The recent sending home of diplomats from Peru is a very strong signal of Peru’s position.

We also look forward to joining Peru – to Peru taking a seat in the UN Security Council. We know we’ll have a likeminded partner to consult with, to collaborate with on the important issues that will come before the Security Council. And we also discussed the important steps that Peru has taken to position itself well for an invitation to (inaudible) accession to the OECD. Peru has taken many measures to put itself in a very good position.

We discussed our joint cooperation on transnational criminal organizations, both of our commitments to disrupting the illicit drug trade, narcotics trafficking, that is so detrimental to both Peru and to the United States. We also discussed deepening our trade ties. The PTPA has served both of our countries well, with trade having increased 60 percent over a five-year period. Interestingly, the president shared a story with me about the history of the chicken industry here, and I learned that Peru is the second largest producer of eggs in Latin America. But importantly, I learned that the chickens are eating U.S. corn, so our U.S. farmers will be very happy to hear that back home.

The United States appreciates Peru’s leadership in the region, in particular the Lima Group’s very important role in (inaudible) and addressing the terrible destruction of democratic processes and democracy in Venezuela, and we had a very good exchange on what more can we do to return Venezuela to its rightful constitution.

And finally, obviously, we did discuss the very important Summit of the Americas that Peru will be hosting. We believe the agenda that has been selected to address corruption and strengthening governance institutions in the region is (inaudible) opportunity to create some real results (inaudible) from the summit, and we wish Peru well in hosting the summit.

The United States, again, looks forward to continuing to strengthen this very strong partnership that exists between Peru and the United States. And I thank President Kuczynski for his very strong leadership and commitment to so many areas of common interest that serve both our nations well, but they really serve the stability and prosperity of the entire region as a whole. So thank you very much, Mr. President.

MODERATOR: (Via interpreter) Next, we will hear the remarks by the President of Peru Pedro Pablo Kuczynski.

PRESIDENT KUCZYNSKI: (Via interpreter) I would like to thank the visit of the Secretary of State and his delegation. We see that this reconfirms the strong relationship between our two countries not only at a trade level, but also in terms of security and the fight against drugs and corruption. The free trade agreement that was negotiated about 10 years ago has been quite beneficial for both countries. And as I explained to Mr. Secretary of State, we are exporting products that we cannot even think, such as maize that is the basis for our agricultural industry. We have discussed about the Summit of the Americas that will be preceded by a summit of the CEOs of the region and where we hope to further strengthen the fight for democracy in the Americas and the fight against corruption, particularly the fight to keep democracy and the prosperity of all our countries.

The Group of Lima was established through the ministry of foreign affairs of Peru and is ready to give its opinion on the elections in Venezuela. Certainly, we believe that we need to strengthen humanitarian aid to Venezuela, otherwise we’re going to see a country with very serious problems in this flourishing region.

Finally, we would like to thank the Secretary Tillerson and the Government of the United States for the support you have expressed regarding Peru’s candidature to the OECD. This is an important milestone for us so that we can remain down the road of progress and institutional building that is so important for us to continue prospering.

Welcome, Mr. Secretary of State. I hope you have a good travel to Colombia, and we were very happy to welcome you here.

MODERATOR: (Via interpreter) Ladies and gentlemen, this press session has come to an end. We would like to thank the media for attending this meeting. Thank you very much.