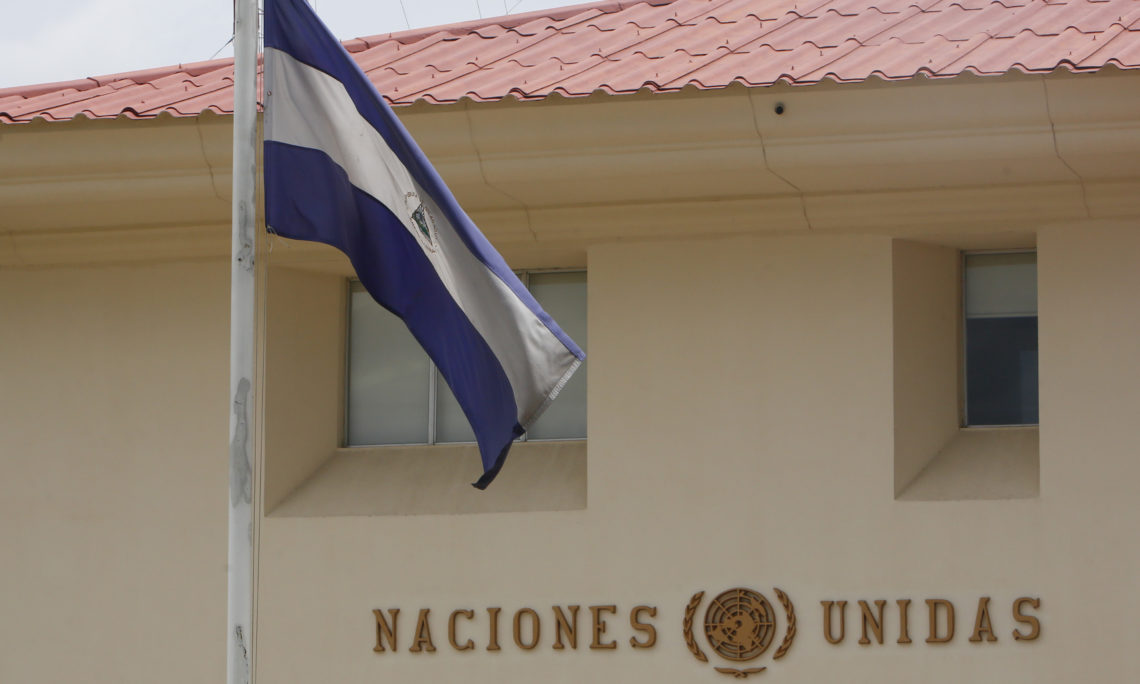 The Nicaraguan flag flies in front of the U.N.’s building in Managua, Nicaragua, Friday, Aug. 31, 2018. The Nicaraguan government is expelling the U.N. team two days after the body published a critical report blaming it for the violent repression of opposition protests. (AP Photo)

The Working Group for Nicaragua of the Permanent Council of the OAS and the Secretary General of the OAS,

Commit to cooperate, each within their respective competencies, to bring to bear all relevant components of the Inter American system to advance a consistent and effective approach to achieve an inclusive and useful dialogue in Nicaragua as quickly as possible.

We express our active support for the Special Monitoring Mechanism for Nicaragua (MESENI), and the Interdisciplinary Group of Independent Experts (GIEI), and for relevant departments with the OAS General Secretariat including the Department of Electoral Cooperation and Observation (DECO) in their activities.

We reiterate our strong condemnation of the acts of violence, repression, violation of human rights and abuses against the population of Nicaragua, as well as the targeted persecution, arbitrary detentions and practices of criminalization of dissidents and their families, as reported by the Inter American Commission on Human Rights (IACHR) and by the Office of the United Nations High Commissioner for Human Rights (OHCHR).

We urge the Government of Nicaragua to respect the agreements reached with the mechanisms mentioned above, to facilitate the gathering of official information from government institutions necessary to do their work and to facilitate access to the detention centres in order to monitor the situation of detainees in the context of the recent demonstrations.

We express our deep concern about the decision of the Government of Nicaragua to withdraw the invitation to the Regional Office of the Office of the United Nations High Commissioner for Human Rights to accompany the Verification and Security Commission established in the framework of the National Dialogue, and conclude the OHCHR’s visit.

Consequently, we further call for the removal of obstacles that the Special Monitoring Mechanism for Nicaragua (MESENI) and the Interdisciplinary Group of Independent Experts (GIEI) face in order to execute their respective mandates, and for the return to Nicaragua of the Representatives of the Office of the UN High Commissioner for Human Rights.

We urge the Government of Nicaragua to take advantage of the good offices available and to seek a positive and constructive outcome at this critical juncture.

We reiterate our willingness to work in order to ensure a constructive and useful dialogue in Nicaragua that will allow for a peaceful and sustainable solution to be found to the grave situation that exists in that country.