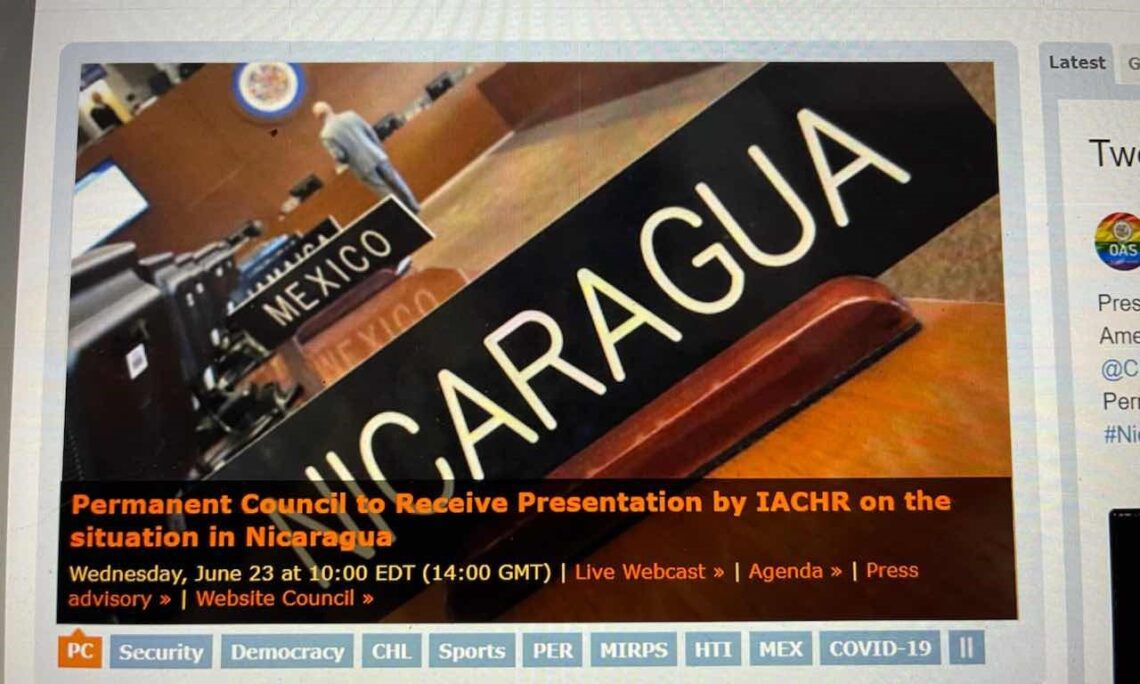 Thank you, Chair, Mr. Secretary General, and the Inter-American Commission on Human Rights.  Commissioner Antonia Urrejola Noguera, we are deeply grateful for your report.

The Nicaraguan Permanent Representative’s banal rhetoric about a U.S. war on Nicaragua would not normally merit any comment, except for the fact that it recalls the stilted language of authoritarian regimes past and present that seek to blame crimes against their own people on outside forces.

Mr. Chairman, we thank you for bringing this matter again before us today.  The OAS must remain engaged on this issue.  As we stated on June 15, we cannot abandon a country, or a people with a brave history of defending their rights and ideals.  Nicaraguans have not given up on their democracy, and we can’t either.

The presentation today makes clear what we all know: the situation in Nicaragua is dire and we must not lose sight of or abandon the victims of repression.

We are remain extremely concerned about the unlawful and often vicious attacks over the last month.  The resilience of the people of Nicaraguan is admirable, but at the IACHR report shows, this is a heartbreaking ordeal for the people affected.

As Secretary of State Antony Blinken stated, “The United States strongly supports the OAS Permanent Council’s call for President Ortega to take urgent action to restore full respect for human rights and to create the conditions for free and fair elections.  It is time for the Ortega-Murillo regime to change course, respect both its own constitution as well as its commitments under the Inter-American Democratic Charter and allow the Nicaraguan people to fully exercise their rights, including their right to choose their leaders in free and fair election.”

Despite international calls pressing the Ortega regime to ends its repression, the appalling actions of this regime have intensified in the last few weeks in a way that has alarmed democratic nations, including a majority of countries in this room today.  The recent, arbitrary arrests of now five presidential candidates – Cristiana Chamorro, Arturo Cruz, Félix Maradiaga, Juan Sebastian Chamorro, and Miguel Mora – as well as other political prisoners, including Violeta Granera and Jose Adan Aguerri, are immoral and unacceptable.

The United States condemns these arrests in the most unequivocal terms and holds President Ortega and Vice President Murillo responsible for their safety and well-being.

As these individuals languish in jail, we call on the Nicaraguan government to stop this wave of repression and to immediately release all of those mentioned above, as well as other civil society and opposition leaders detained for exercising their human rights.

We also urge the Ortega regime to accept a visit by the IACHR.  It is essential that the OAS’ premier independent human rights body be given access to the country.

Chair, OAS colleagues, what we are asking for is simple.  The desires for freedom and opportunity are universal.  The people of Nicaragua are yearning for what all who live under authoritarian regimes seek, and the time is now for democratic nations to stand as one and demand that their voices be heard.

It is critical that we, as signatories to the Inter-American Democratic Charter, stand with the courageous individuals in Nicaragua who raise their voices to demand their universal rights.  Under extremely difficult circumstances — and often at grave personal risk — human rights defenders and civil society activists throughout Nicaragua are working to actualize their rights under the Democratic Charter and exercise their freedoms.

Today, we repeat our urgent call for the Nicaraguan Government to change course and allow the Nicaraguan people to fully exercise their rights — including the right to choose their leaders through free and fair elections.

The United States will continue to support all those who champion the fundamental principles of human rights and democracy, and we will never stop speaking out for the human rights of all individuals at home and abroad.  It is part of who we are as a people and what we stand for as a Nation. We will continue to stand with the people of Nicaragua in their fight for human rights, democracy and accountability.

Mr. Chairman, before closing I want to briefly express my government’s condolences to the family of former Nicaraguan President Enrique Bolanos, who passed away last week.  President Bolanos was an engineer and a successful businessman before assuming the Vice Presidency and then the presidency of his country.  He was a tireless advocate of transparency, economic development and democratic principles.  Don Enrique governed a different Nicaragua, replete with political conflicts and challenges, but a Constitutional democracy that respected human rights.  We must not forget what that means as we remember him today.  Thank you, Chair.