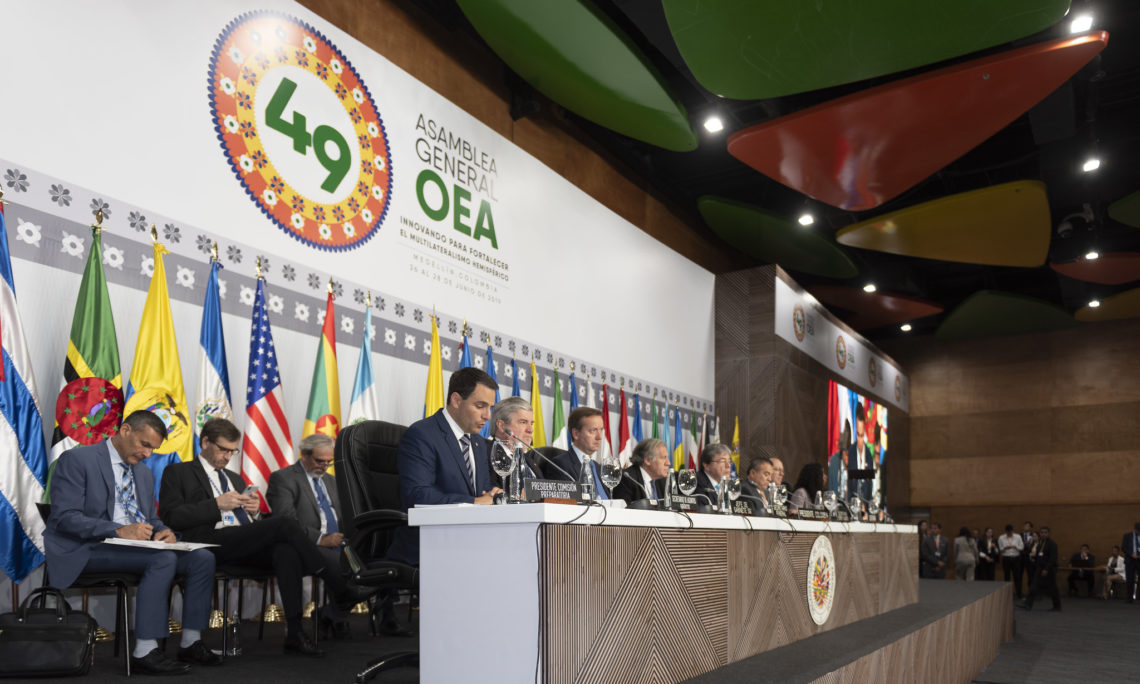 Mr. President, the United States is very pleased to support this resolution accepting the representatives of the democratically elected Venezuelan National Assembly. We welcome the decision of the OAS General Assembly to follow the lead of the OAS Permanent Council, so that representatives of Venezuela’s democratic government can participate throughout the entire OAS system.

Despite this success, we still face great challenges in Venezuela. Venezuela is in a humanitarian crisis due to the failed policies of the former Maduro regime. This man-made disaster in Venezuela has brought great suffering to the Venezuelan people, as people are starving in a once rich country, and there are gasoline shortages in a country with perhaps the largest oil reserves in the world. Maduro’s political repression and economic failures have forced four million Venezuelans, more than ten percent of the entire population, to flee the country. These refugees have flooded into neighboring countries, creating a regional crisis.

Many people ask: If the former Maduro regime failed so spectacularly, why are they still in the country? One reason is foreign interference by Cuba and Russia. They spy on Venezuelans, watch over the Venezuelan military, and protect Maduro from his own people.

In spite of these obstacles, we have made great progress on Venezuela over the last year. At last year’s OAS General Assembly the Maduro regime representatives keep evading responsibility for their failed economic and social policies, held a fraudulent election to re-elect Maduro, and tried to hide all of their human rights violations. It is very refreshing to work with representatives of the democratic government of Venezuela.

We also must salute the democratic courage of Interim President Juan Guaido and the National Assembly. They are risking their lives for the future of Venezuela. The former Maduro regime has tried to intimidate National Assembly deputies by unlawfully stripping them of parliamentary immunity, harassing them and their family members, arbitrarily detaining them, and raiding their homes. The Maduro-controlled intelligence service, SEBIN, has arrested interim President Guaidó’s deputy and chief of staff. In spite of the relentless repression President Guaido and the National Assembly stand strong. We should too.

People also ask, what is the road forward now? Quite simply, stay the course. Our recognition of the National Assembly is working. Our diplomatic and financial pressure, including sanctions, is working. Our calling out the repression of the former Maduro regime is working. We are on the right path. We just need to maintain our unity. We cannot let the former Maduro regime and its allies divide us. If we work with the democratic Venezuelan representatives, the Venezuelan people, and all of us stay together, we can succeed in bringing about the peaceful restoration of democracy in Venezuela.

In the end, the people who yearn to be free will ultimately be free.