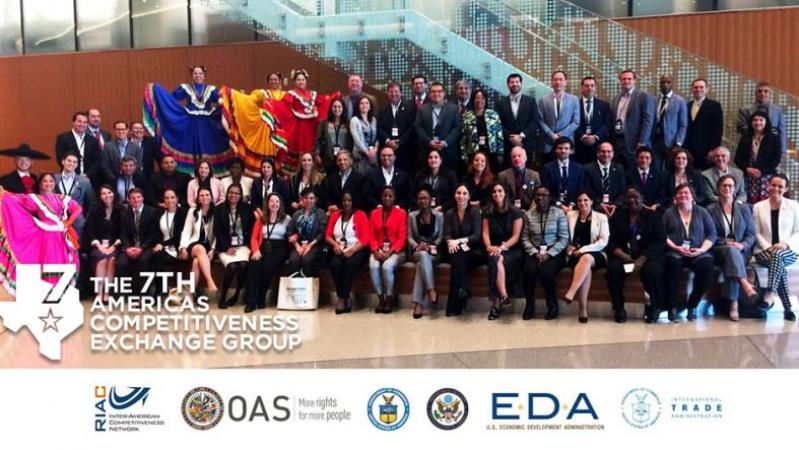 This month, I had the privilege of traveling to Central Texas for the 7th Americas Competitiveness Exchange on Innovation and Entrepreneurship (ACE VII), an intergovernmental initiative between the Department of State, Department of Commerce, Organization of American States, and others. The Exchange expands commercial ties in the Western hemisphere by promoting U.S. job creation and focusing on the steps specific regions in the United States are taking to encourage economic growth within their communities. The Exchange’s Central Texas tour lasted from April 2-7 and showcased the best of Texas’ innovation and entrepreneurship, including the collaboration taking place between governments, private businesses, and universities to continue advancing economic development and strategic investments in the area.

During the Exchange’s stop in San Marcos, I had the honor to speak about the work done by my office –the Secretary’s Office of Global Partnerships at the U.S. Department of State—to advance awareness of public-private partnership (PPP) as an effective mechanism for solving complex challenges.  I could not envision a better atmosphere to discuss PPPs and showcase that they are a tool that can be leveraged not just at a national and international level from Washington, DC, but also at a local and regional level.  My first moments in Central Texas hinted that I was not alone in this “collaboration for good” philosophy.  . As soon as I joined the group, which included 51 participants from 27 countries, I was welcomed by all, including organizers from the Organization of American States (OAS), Dominica’s Minister of Commerce, and the mayor of San Marcos.  I quickly realized that the benefits of PPPs are well received in environments, such as the one the ACE conference fosters, where individuals’ diverse backgrounds contribute to an enthusiastic spirit necessary for effective collaboration.

Examples of Central Texas’ entrepreneurial spirit permeated throughout the trip. When I first arrived, we visited Thermon Manufacturing Co., where we heard from representatives of employers, such as Epic Piping, CFAN, RSI Inc, and Mensor, about their focus on Texas’ thriving manufacturing industry. After visiting Thermon, we traveled to Texas State University’s Science Technology and Advance Research (STAR) Park, which provided another great display of the entrepreneurial ecosystem that can be cultivated when public and private sectors work together. A technology-focused incubator created out of a partnership between Texas State University, the Economic Development Administration of the U.S. Department of Commerce, and the city of San Marcos, STAR Park supports a collaborative community of start-ups that utilize the Park’s resources to help scale their businesses.  Thanks to the public-private partnership that created STAR Park, participating small and mid-sized companies are able to work on creating cutting edge products that would otherwise require millions of dollars of capital upfront to produce.

Texas State University’s STAR Park served as a terrific example of how partnerships can be used to promote small-business development in traditionally underrepresented areas, similar to the objectives of OAS’ Caribbean Small Business Development Centers (SBDC), or the way my office has teamed up with the Unreasonable Group, as well as private sector companies Johnson & Johnson and Lowe’s Hardware,  to create  a partnership called “Unreasonable Goals.” The Caribbean SBDC leverages technical, human, and financial resources to help participating small and mid-sized enterprises thrive while eliminating operational inefficiencies. The program has helped established SBDCs in five different countries throughout the Western hemisphere, many of which were represented at ACE VII Conference. Similarly, the Unreasonable Goals partnership serves as an accelerator dedicated to helping 16 global entrepreneurs scale up their companies’ operations.

Thomas Debass speaks on public-private partnerships at Day 3 of the ACE Conference.

Following these visits, the evening ended with a night of famous Texas BBQ and live music in San Marcos’ Historic Downtown Square. There is nothing quite like watching representatives from various countries dancing along to old-fashioned Texas swing music, a true diplomatic endeavor. After everyone’s stomachs were full of brisket and potato salad, I was honored to provide more insight on the growing need to engage the private sector in order to accomplish both foreign and domestic economic development goals. I cannot thank the city of San Marcos, and the state of Texas, enough for opening their home to us and showing the ACE VII conference the power of public-private partnerships for the future of successful business development. Stay tuned to the next ACE which will be in held in north central Florida in October 2017!

About the Author: Thomas Debass serves the Acting Special Representative for Global Partnerships at the U.S. Department of State.