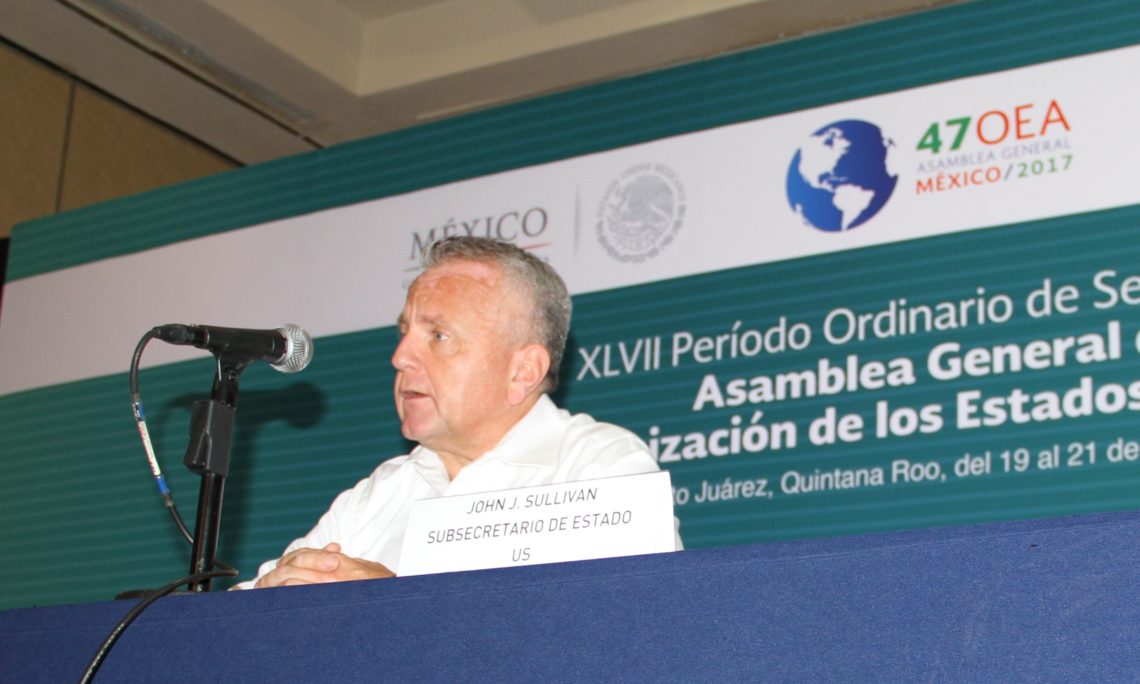 In his remarks to 33 heads of delegation from Latin America, the Caribbean, and Canada, Deputy Secretary Sullivan outlined U.S. goals for engagement in the Americas for mutual security and shared prosperity, the principles and values we share with fellow OAS member states, and our support for collective OAS action when these principles and values are threatened, such as in Venezuela.

Deputy Secretary of State John J. Sullivan poses for a family photo with fellow heads of delegation at the 47th Regular Session of the Organization of American States (OAS) General Assembly in Cancun, Mexico, on June 19, 2017.

Deputy Secretary Sullivan said, “The United States recognizes the importance of our partnerships with our neighbors and friends in the Western Hemisphere. Our partnerships in this region are vital to our economic competitiveness and our ability to solve our shared security challenges.”

On the issue of Venezuela, the Deputy Secretary noted the OAS’ critical role in helping the people of Venezuela find a peaceful, democratic, and lasting solution to the country’s current crisis. He said, “The United States has joined with a growing number of courageous democracies in our region to urge the Venezuelan Government to hold free elections, respect the independence of the national assembly, release all political prisoners, and directly address the country’s humanitarian crisis. We join with these partners in recognizing that the principle of nonintervention cannot be used to justify inaction or avoid responsibility.”

Lastly, Deputy Secretary Sullivan highlighted the United States’ renewed focus on deepening our multilateral cooperation in forums such as the OAS in the Caribbean.

The Deputy Secretary also held bilateral meetings on the margins of the General Assembly with OAS Secretary General Luis Almagro; leaders of the Venezuelan opposition; and leaders from Argentina, the Bahamas, El Salvador, Grenada, Haiti, Panama, Paraguay, and Saint Lucia, to underscore our commitment to sustained U.S. engagement with our partners across the Western Hemisphere.

Briefing on U.S. Participation in the General Assembly of the OAS