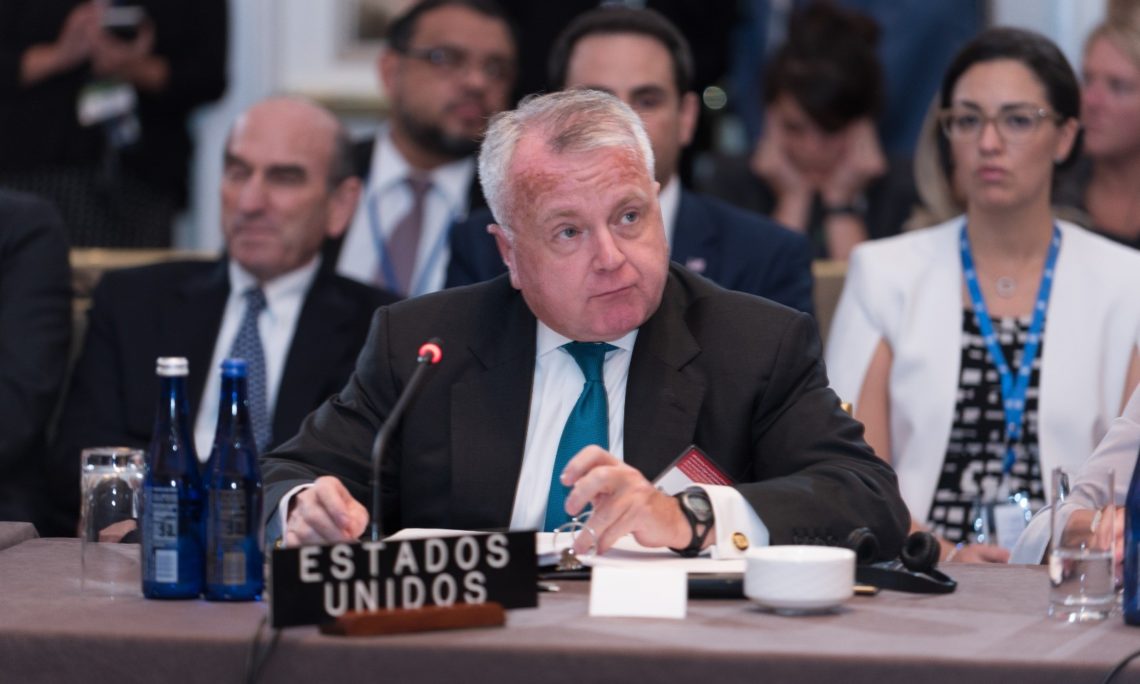 Deputy Secretary of State John J. Sullivan addresses the Meeting of Consultation of Ministers of Foreign Affairs which serves as the Organ of Consultation in Application of the Inter-American Treaty of Reciprocal Assistance (also known as the Rio Treaty), in New York, September 23, 2019.

Good afternoon. Thank you, Mr. President, Vice-Presidents, and delegates. Today’s meeting of Western Hemisphere democratic countries marks a turning point for the horrific crisis in Venezuela. Your presence here sends a resounding message that freedom and democracy are values our nations cherish, dictators and tyrants will face accountability for crimes against their citizens, and we as a region stand united against the repression of the illegitimate narco-state of Maduro’s regime.

It is a great honor to join you today in this Organ of Consultation of the Inter-American Treaty of Reciprocal Assistance. As an essential element of the Inter-American system – older than the Organization of American States itself – today’s meeting on the Rio Treaty provides a critical, legal forum for additional, regional action to support the Venezuelan people’s pursuit of freedom from tyranny.

As you all know, the State Parties to the Rio Treaty last met in the wake of the brutal terrorist attacks on my own country. These attacks, in this very city, claimed nearly 3,000 American lives on September 11, 2001. We as the United States of America will never forget that horrific day or the regional solidarity you you showed in support of us.

Now, the Venezuelan people have asked their democratic neighbors for mutual assistance in “maintaining inter-American peace and security” as outlined in the Treaty. Not only does the brutal dictatorship and narco-state of Nicolás Maduro’s illegitimate regime pose a grave threat to the Venezuelan people, it also directly threatens the “common defense” and “peace and security of the Continent” as these terms are defined in the Rio Treaty.

Ninety percent of Venezuelans live in poverty and more than 4.4 million people have fled Venezuela, accounting for the largest forced displacement of individuals in our hemisphere, second only to the humanitarian crisis in Syria on a global scale. The UN High Commissioner for Human Rights has condemned the violations committed by the former Maduro regime, including some 7,000 murders since 2018 at the hands of his security forces. Maduro’s forces tortured Venezuelan Navy Captain Rafael Acosta so grievously that he died in their custody. Councilman Fernando Alban likewise died in their custody, thrown to his death after returning to Venezuela following his participation in UNGA events here in New York last year.

We have witnessed this regime silence media, jail dissenters, and attempt to dismantle all elements of democracy, including the National Assembly. We have seen on multiple occasions how this regime has manipulated well-intentioned negotiations as a stalling tactic, including the most recent round of the Oslo Process, where they refused to discuss the elements necessary to reach a resolution of the crisis—a transitional government to organize free and fair elections. The Venezuelan people can’t wait any longer.

Mass migration, public health risks, oil shortages, rising crime and violence, criminal groups operating with impunity, and Russian, Chinese, and Cuban patrons – all these destabilize regional security and our countries’ abilities to protect our citizens and advance economic prosperity. In short, the former Maduro regime is a clear threat to peace and security in the Western Hemisphere.

And let’s be clear – what people are suffering through today was not caused by war or natural disaster. Nor was this caused by international sanctions, as the regime would have others believe. The Maduro regime’s rampant greed and lust for power caused this humanitarian crisis. Through massive kleptocracy and economic mismanagement, they drove one of the hemisphere’s richest countries into total economic collapse. We cannot, we must not, accept that anybody but Maduro bears responsibility for this catastrophe.

And we must recognize the tremendous support provided by Colombia to over 1.5 million Venezuleans who have fled their homes, and the support by countries throughout the hemisphere, from Brazil to Ecuador, Curacao, Peru, and others. To stem Venezuelan suffering and respond to humanitarian consequences in our hemisphere, we must continue to work together as a whole.

Our decisions here today can help reset Venezuela’s trajectory, and in so doing, reaffirm our commitment to the Inter-American Democratic Charter. With that Charter, we agreed that “the peoples of the Americas have a right to democracy and their governments have an obligation to promote and defend it.”

Words on paper are only as good as the actions that flow from them. The Rio Treaty affords an opportunity to the region to finally take corrective action. We strongly encourage everyone to support the draft resolution to allow for the region to hold the former Maduro regime officials responsible for violations of human rights, corruption, narcotics trafficking, and their many financial crimes.

We understand the resolution commits all of our countries, for example, to identify or designate relevant person and entities to take appropriate measures where doing so is supported by the facts and consistent with national law. Indeed, in the case of the United States, we have already identified and designated people associated with these crimes.

We have revoked over 700 visas and sanctioned over 200 individuals and entities. But the key Maduro officials have used this situation to enrich themselves, which has crippled the Venezuelan people. These sanctions have crippled the regime’s ability to profit from their illicit behavior.
The United States has – and will continue – to support the Venezuelan people and Interim President Guaidó’s efforts to restore democracy. We look forward to the discussion today on additional actions the region, collectively, can take to see Venezuela return to a free and prosperous country. Thank you.