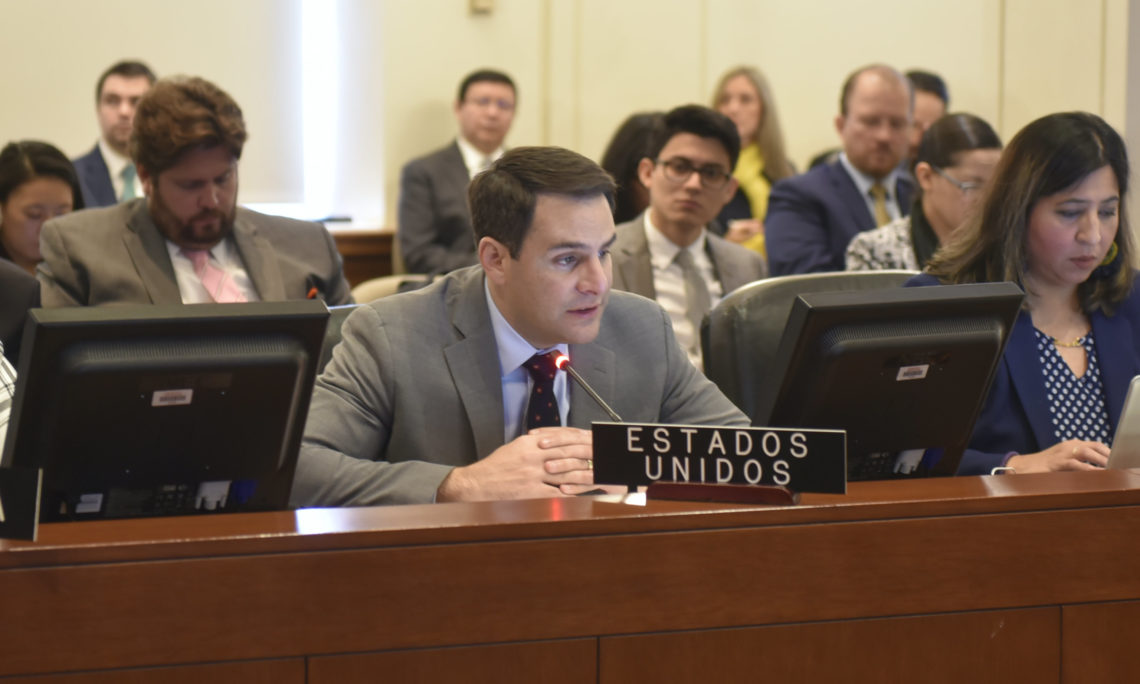 Madam Chair, we agree that the OAS Permanent Council should carefully monitor the situation in Bolivia, although the current resolution is actually a distraction from the real problems in Bolivia.

The United States would make four broad observations about the resolution. First, the United States completely condemns racism and strongly agrees that the indigenous people have the same rights and opportunities in every country, including Bolivia. The proponents of the resolution pretend that there is a major crisis and violence focused on indigenous people in Bolivia. Where is the proof? Not just one or two cases, but a pattern of violence against the indigenous. We have asked them to provide evidence, and they have not provided anything.

In contrast, last week the Bolivian representatives described how the Morales regime violated the rights of the indigenous, such as building a road through a national forest, that damaged indigenous communities.

After hearing these facts from the sovereign government of Bolivia, what did the proponents do? Nothing. They completely ignored all contrary facts and still presented the same resolution.

Second, this resolution ignores the real problem in Bolivia. The OAS DECO department and others have exhaustively documented intentional and massive election fraud by the former Morales regime. The resolution says nothing about Morales election fraud and subversion of democracy. Instead, the resolution repeats the false claims of the former Morales regime, stated by former Foreign Minister Pary in this very chamber, that any claims of election fraud were just racism against the indigenous. Now that the OAS and DECO have proved fraud, you would think that countries would take it seriously. The proponents ignore the real issue in Bolivia.

Third, why is CARICOM, an organization which always preaches the principle of non-intervention, intervening in the sovereign affairs of another country? Certain CARICOM member states have given many high-minded speeches decrying any actions to protect democracy in Venezuela or to address the humanitarian situation of human rights situation in Venezuela. The UN report by High Commissioner Michelle Bachelet documented thousands of extrajudicial killings in Venezuela, and these states refused to do anything.

Indeed, prior to the ouster of former President Morales, these same CARICOM countries refused to take action in Bolivia, and preferred to look the other way on massive election fraud. In our view, the work of the OAS Electoral Observation Mission and DECO showed the OAS at its finest hour protecting democracy in the Western Hemisphere. Why do the proponents seek to ignore this, and instead peddle the Morales narrative?

How can the CARICOM countries support this resolution? This resolution directly violates all of their claimed support for non-intervention, since this resolution was presented without prior consultation with the Bolivian Government, and now they reject the very reasonable changes suggested by Bolivia. After this, it will be very hard to take seriously CARICOM claims about the principle of non-intervention.

Fourth, this resolution is not as innocuous as it sounds, and actually makes the situation worse. Of course, the United States condemns racism and supports the rights of indigenous peoples. If OAS Member States want to condemn racism, we suggest that you support the Bolivian text.

The CARICOM resolution, in contrast, does not just condemn racism. The transitional government of Bolivia is not in a safe space as they consult with all political parties, including the MAS party and indigenous groups, to organize elections. Former President Morales still lurks outside Bolivia, seeking to overturn the will of the people and return to power. The OAS and all OAS Member States need to support the Bolivian transitional government at this critical time, not support the racism narrative of a former Morales regime.

Madame Chair, we vote on many resolutions, some of them important, others safely affirm our values, but this one undermines democracy and violates our values. We urge other OAS member states to recognize the resolution for what it is, and vote for the Bolivian alternative