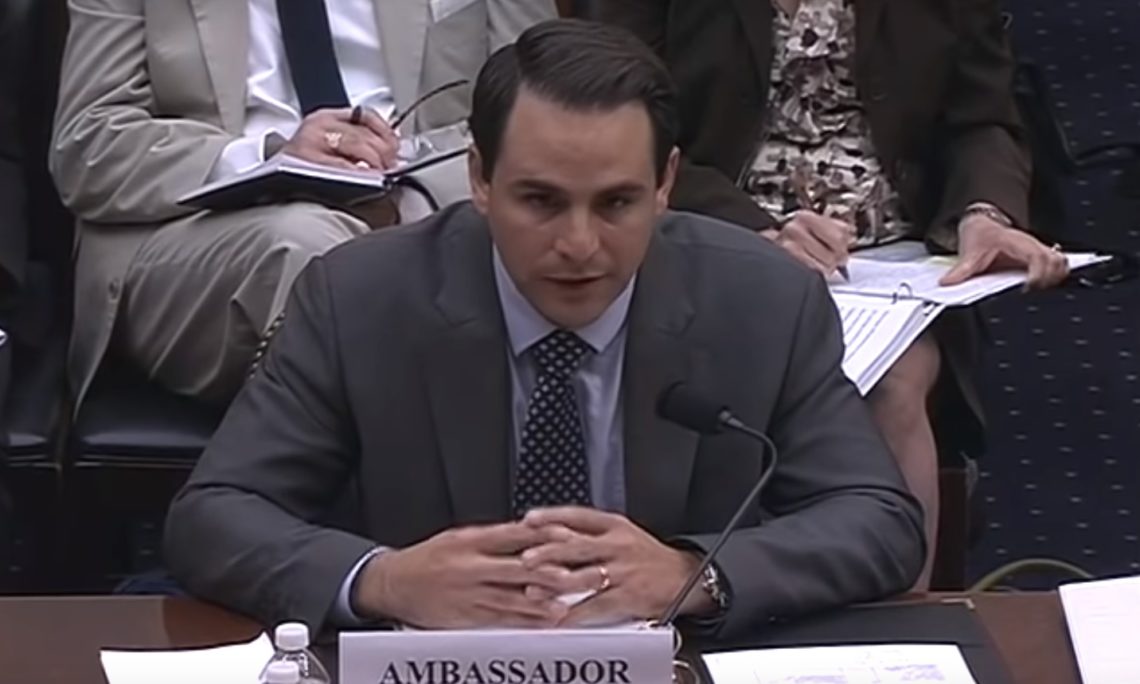 Chairman Cook, Ranking Member Sires, and Members of the Subcommittee, thank you for conducting this hearing and for allowing me this opportunity to come before you to address this most urgent matter and the critical need to work together to uphold freedom, democracy, and respect for human rights for the people of Nicaragua.

On June 4, at the 48th Regular Session of the General Assembly of the Organization of American States (OAS), Secretary Pompeo underscored that “we join with the nations around the world in demanding that the Ortega government respond to the Nicaraguan people’s demands for democratic reforms and hold accountable those responsible for violence.”

The Secretary’s remarks echoed those of Vice President Pence during his May 7 visit to OAS headquarters in which he also stressed that the United States will continue to stand with all Nicaraguans peacefully exercising their fundamental freedoms in the face of tremendous repression, and will continue to press for democracy and accountability in Nicaragua.

Esteemed members of the subcommittee, let me begin today by underscoring that — as the Vice President has also stated — the United States condemns the Nicaraguan government’s brutal actions and ongoing violence and intimidation campaign in the strongest terms, and assure the Nicaraguan people who suffer repression that they are not forgotten. The United States is under no illusion as to who is responsible for this violence. The world is watching, and these attacks and threats against peaceful protestors and the general population are unacceptable. They must cease immediately. It is critical that the Government of Nicaragua protect all its citizens. Human rights abusers and violators must be held accountable, and it is imperative that the OAS take a leadership role in addressing this situation.

To that end, the visit by the Inter-American Commission on Human Rights (IACHR) to Nicaragua from May 17 to 21, just prior to the OAS General Assembly, proved vital. The Commission’s important and timely report — entitled “Gross Human Rights Violations in the Context of Social Protests Nicaragua” — received formally by the OAS Permanent Council on June 22, recounts a variety of systematic and disturbing human rights abuses and violations carried out by the Nicaraguan government. The report also indicates the clear role of the Nicaraguan government in the ongoing violence and repression.

Based on its observations, the IACHR has stressed that Nicaragua has the obligation to dismantle repressive structures, para-police groups and other armed third-party structures operating in the country. The Commission has insisted upon the immediate end to repression of demonstrators and arbitrary arrests, and respect for the lives, personal integrity and safety of all persons who exercise their rights and liberties in a context of extreme repression. Since its May working visit, the IACHR has also adopted twelve resolutions requesting precautionary measures to protect the lives and personal integrity of 69 people on various issues, including their families.

On July 2, the IACHR also announced the establishment of the Interdisciplinary Group of Independent Experts (GIEI) for Nicaragua, with the objective of contributing to and supporting investigations of violent acts that have taken place in the country since April 18. The members of GIEI were selected by the IACHR and appointed by the Secretary General of the OAS. The GIEI arrived in Managua on July 1 to begin their work.
These mechanisms are now operating on the ground, engaging with a broad array of stakeholders in Nicaragua in compliance with their mandates.

The IACHR has stated the MESENI will remain in the country as long as necessary. We will reiterate our calls for the Nicaraguan authorities to ensure the IACHR has full access to investigate human rights violations and abuses against Nicaraguans. We will also continue to press the government to implement fully and immediately the recommendations of the IACHR report.

These efforts demonstrate the important value of the role of the Inter-American system in Nicaragua, and I am pleased to share that the United States supports the Commission’s efforts and our assistance is making a difference in this area. We are pleased that many OAS member states have welcomed the new efforts on the part of the Commission. To this end, we are urging all member and observer states before the OAS to provide necessary funds to ensure their effective and continued operation for as long as required.

We also want to acknowledge the invitations extended to the Office of the United Nation’s High Commissioner for Human Rights (OHCHR) and the European Union to visit Nicaragua. It is important that all of these groups immediately begin their work. The OHCHR arrived in the country on June 26 and met with church officials, the Civic Alliance, human rights organizations, and the government. The EU has confirmed it has received the government’s invitation to visit the country and stated it would consult with its member states on the request.

Let me also be clear that while these mechanisms and visits are necessary and helpful steps toward greater accountability and enhanced citizen security, they nonetheless are insufficient to resolve the ongoing crisis of governance and democratic backsliding in Nicaragua.

Democratic reforms to allow early, free, and fair elections must move forward simultaneously with efforts to address human rights violations and abuses. This is the only way for democratic institutions to grow and be responsive to the will of the Nicaraguan people.

The Nicaraguan government must commit to strengthen democratic processes and institutions and to respect human rights and fundamental freedoms. We strongly support the proposal by many sectors of society for early, free, and fair elections with credible domestic and international electoral observation in line with the terms and spirit of the Inter-American Democratic Charter signed in 2001.

With this in mind, the United States welcomes efforts by the OAS to support the national dialogue process. We continue to encourage all parties to resolve the current crisis peacefully, with respect for human rights and the rule of law, and in support of an inclusive democratic future for the Nicaraguan people. We have urged the OAS Secretary General to promote and support the reform of democratic institutions in Nicaragua, especially the electoral mechanisms necessary so as to allow for early, free, and fair elections.

We recognize that this is a significant challenge, but it is a necessary one if the OAS is to respond effectively to the region’s collective commitment to promote and defend democracy. Simply put, the government-sponsored violence and loss of life in Nicaragua reflects the need for immediate democratic reforms, consistent with the purposes, practices, and principles of the OAS — especially those articulated in the Inter-American Democratic Charter.

We will continue to support the Episcopal Conference of Nicaragua’s (CEN) commitment to advance the national dialogue and negotiations to resolve the ongoing crisis. In this manner, we strongly reaffirm our unwavering support for the Nicaraguan people.

On June 20, I joined our ambassador in Managua, Laura Dogu, in a meeting with President Ortega and the leaders of the CEN. We also met with the Episcopal Conference and parties to the dialogue it sponsors, including the Civic Alliance and the government.

Throughout our visit, I heard widespread calls among Nicaraguans for early, free, and fair elections. The United States firmly believes that early elections represent the best way to resolve the political crisis. There is no other apparent way to resolve the political crisis. For its part, the OAS has an important role to play in this effort through the promotion of electoral reforms, electoral monitoring, and technical support, given the right conditions and guarantees.

In response to the human rights violations and abuses committed by the police and other government aligned groups, it is imperative we continue pressing the Nicaraguan government to halt the violence, respect human rights and fundamental freedoms, revive its democratic institutions, and work with the church-led dialogue toward a peaceful resolution of the crisis. The United States continues to support this dialogue process and recognizes the centrality of this Nicaraguan people’s initiative.

In that regard, let me also touch on some of the steps we have taken with respect to visas. On June 7, the Department of State adopted visa restrictions on Nicaraguans responsible for or complicit in human rights abuses or undermining democracy in Nicaragua, barring their entry into the United States under Section 212 (a)(3)(c) of the Immigration and Nationality Act. This action targets certain government officials responsible for or complicit in these abuses, and is not directed at the Nicaraguan people. The Department may seek to implement additional appropriate visa restrictions and revocations of Nicaraguan officials as the situation requires. Aside from visa restrictions, the Department is exploring a variety of options for this purpose.

On July 5, the U.S. announced the imposition of sanctions on three individuals for conduct related to human rights abuse and/or acts of corruption pursuant to Executive Order (E.O.) 13818, which implements the Global Magnitsky Human Rights Accountability Act. These include National Police Commissioner Francisco Javier Diaz Madriz, Secretary of the Mayor’s Office of Managua Fidel Antonio Moreno Briones, and Jose Francisco Lopez Centeno (Lopez), Vice President of ALBA de Nicaragua (ALBANISA) and President of Petronic. As a result of these actions, all of these individuals’ assets within U.S. jurisdiction are blocked, and U.S. persons are generally prohibited from engaging in transactions with them. This followed our action in December of imposing such sanctions on Roberto Rivas, then head of Nicaragua’s Supreme Electoral Council.

Mr. Chairman, members of the committee, the United States will continue to work in Managua, in other capitals, and at the OAS especially, to ensure the Ortega government is held accountable for meeting its commitments to the CEN dialogue, complying with its international legal obligations, and halting its violations and abuses of human rights of the people of Nicaragua. We will also support the work of the IACHR in Nicaragua and will continue engaging with OAS leadership to ensure that its programming in Nicaragua is appropriate and responsive to the current context.

It is also vital that OAS efforts be carried out in a timely and credible timeframe and that OAS engagement is not manipulated by the government simply to buy time and prolong the process to maintain its undemocratic grip on power.

Let me close by underscoring that the United States will continue to stand with the international community and partners throughout our hemisphere in support of the Nicaraguan people, and that we will work to uphold their right to have a voice in their government. We are also committed to engaging with Congress and the NGO community throughout this process.

his reflects our belief that every Nicaraguan deserves a government that upholds and protects his or her human rights and fundamental freedoms, respects the rule of law, and provides a democratic future for all. This holds just as true for Nicaraguans as it does for the people of Venezuela and Cuba. Let the suffering we have heard about today end, and let us uphold our region’s commitment to the principles of freedom and democracy, which remain at the core of our hemispheric union.

Thank you very much. I look forward to your questions.