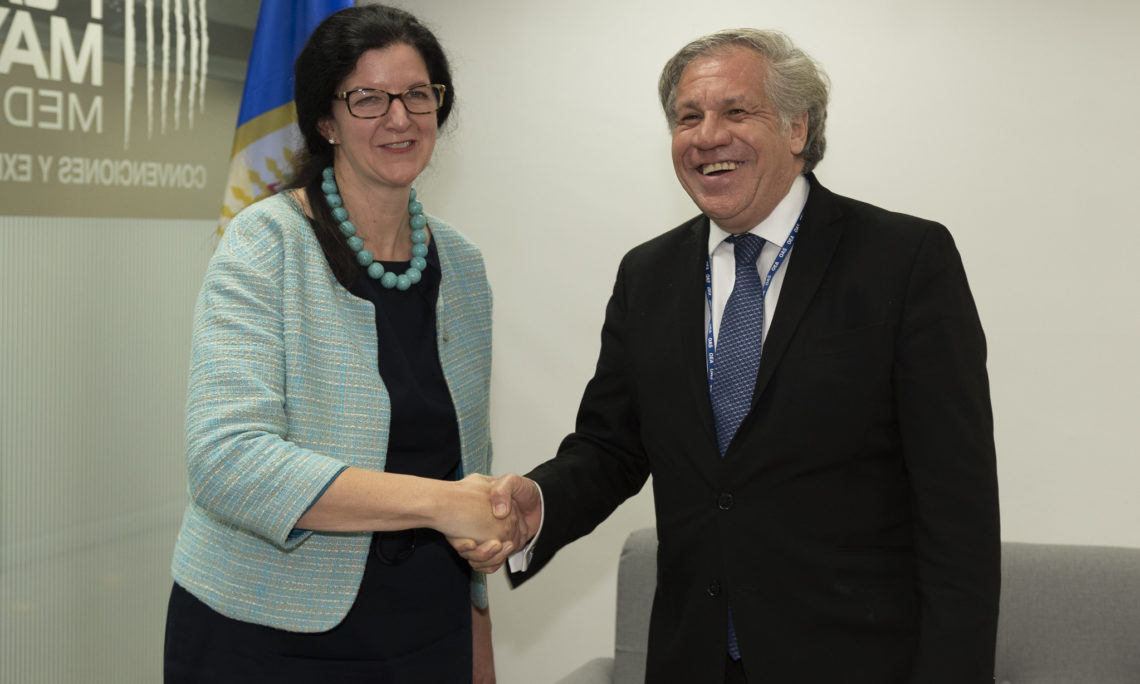 Thank you very much. I’d like to thank President Duque, Secretary General Almagro, and your respective teams for organizing this 49th General Assembly of the Organization of American States. We appreciate your strong and tireless leadership.

The United States is pleased to announce today our continued support for Secretary General Almagro and his leadership of this institution and for his willingness to be considered for another term. The United States proudly supports his candidacy for re-election.

I would also like to acknowledge the great work of our permanent representative, Ambassador Carlos Trujillo, and our delegation.

I am pleased to be here on behalf of Secretary Pompeo who sends his regards from the G-20 and on behalf of Deputy Secretary John Sullivan who was unable to be with us today. We expect a very successful OAS General Assembly.

It’s a pleasure to be here in Medellin as head of the U.S. delegation. I’m delighted for the opportunity to see again many of my colleagues from the hemisphere to discuss our shared opportunities and challenges. The United States places great value on the OAS and its role as the preeminent political forum in the Hemisphere. Together, we must all do our part to strengthen the OAS and to deal effectively with the challenges to our values that we face today, and those that we will face in the future.

It is fitting that this Assembly is actively engaging on efforts to recommit member states to democracy as our most important legacy to the next generation of our hemisphere’s citizens and leaders.

We come together here in Medellin also to mark 70 years since adoption – here in Colombia – of the OAS Charter and of the American Declaration of the Rights and Duties of Man, a document that remains the foundation of the Inter-American human rights system.

It is important to recall the historic significance of that moment and the remarkable impact it would have for the rest of our world. The American Declaration proclaims that “all men are born free and equal, in dignity and in rights.” This bold, self-evident statement served as a central foundation for the Universal Declaration of Human Rights, and thus enlightened this region and the world along with it.

Since the adoption of the OAS Charter and the American Declaration, our region has faced the tough challenge of making good on the promise of these visionary documents.

Today, we live in a region where our peoples have made enormous sacrifices to strengthen and consolidate our democratic gains. Respect for human rights and fundamental freedoms is no longer the exception, but the norm. Our governments’ commitment to democracy and the rule of law is enshrined in the Inter-American Democratic Charter, which has been the inspiration of similar democratic commitments around the world.

The Democratic Charter remains our compass as we seek to strengthen democratic governance throughout the Americas. The Charter requires our governments to work together to promote and protect the institutions of representative democracy that we all hold dear. This commitment was groundbreaking when it was first established it in 2001, and it still distinguishes the OAS from most other regional organizations.

In order for the OAS as an institution to be effective in addressing these challenges, we sovereign member states must recommit to making it so. That means stepping up to put the OAS on firm and efficient footing – with the support and financial backing of all of its member states.

With this in mind, I would like to underscore the importance of the decision, taken at the 2017 General Assembly, to reduce the organization’s dependence on a single member state. This was an important step rooted in increasing ownership in the success of the OAS, and sharing the financial responsibility.

It will entail tough choices, forcing us to first identify and then focus on priorities, but it will ultimately put the OAS on more sustainable financial and political footing.

I would like to recognize Secretary General Almagro’s leadership in putting the OAS on firmer financial footing over the last two years. There is still more work to do, of course, and we look forward to ongoing cooperation with all member states on the substantive prosperity and reform agenda for our Organization in the coming weeks.

At the same time, the OAS must continue to demonstrate its responsiveness in today’s evolving political challenges. We must be realistic and pragmatic in confronting our shared challenges in the region.

The crisis in Venezuela tops the list. It is not only a crisis in Venezuela itself, as we all know. It has become a regional crisis, with effects felt most acutely here in Colombia, but in other OAS member states and beyond. This requires ongoing regional and OAS engagement. We are grateful for the OAS’ strong leadership.

At its heart, the crisis in Venezuela is political, with profound humanitarian, economic, social, and other consequences. That is why its solution must be political. Only after the former Maduro regime steps aside and relinquishes control over state institutions can a real political transition begin. After all, how can we expect Maduro to engage in good faith while his regime revokes the immunities of elected deputies?

How can we expect Maduro to respect democratic institutions when he has illegally arrested and denied humanitarian access to multiple members of the National Assembly, including Edgar Zambrano, as well as to interim president Guaidó’s chief of staff, Roberto Marrero? This is not a man with whom we can negotiate. Maduro’s definitive departure is the necessary first step toward the restoration of democracy. Of course, that step alone is only necessary, but not sufficient.

As all of you know, there must be free and fair elections – led by the transition government of interim president Juan Guaidó.

The role of the OAS remains critical for all of these efforts. First, we must face the facts with clear eyes. Then, we must take appropriate action.

Likewise in Nicaragua, it is clear that an alteration of democratic order has occurred. We must live up to the Democratic Charter and recognize this reality, and then act to defend and restore democracy.

To this end, it remains incumbent upon us to respond to the Nicaraguan people’s demands for meaningful democratic reform, and their calls to hold accountable those responsible for widespread human rights abuses at the hands of security forces loyal to President Daniel Ortega and Vice President Rosario Murillo.

The United States supports the mechanisms established by the independent Inter-American Commission on Human Rights to support human rights and democratic governance in Nicaragua. We strongly urge the Nicaraguan government to implement the recommendations issued by the Commission, and to permit the OAS monitoring mechanisms to return to Nicaragua.

In light of ongoing developments, we must consider how to advance action pursuant to the Democratic Charter, which the OAS Permanent Council has already begun to do at the request of the Secretary General. On numerous occasions, Nicaragua has squandered opportunities to have the kind of inclusive and honest dialogue that the Charter calls for.

We seek only what all nations of the OAS want for their people: a return to democratic order, free and fair elections with credible international observation, respect for universal human rights, and the unconditional release of political prisoners. Let us not be misled about the “amnesty law” which the National Assembly approved on June 9, prior to the release of over 100 prisoners in the following days.

The regime’s refusal to take meaningful action on its commitments to undertake significant democratic reforms has demonstrated an unmistakable bad faith. Despite the Nicaraguan government’s claims to the contrary, we know the truth – that Ortega has turned Nicaragua into a brutal authoritarian state.

So as we celebrate our region’s advances at this Assembly, we must consider what the Democratic Charter asks of us when faced with an interruption in the democratic order of a member state: take concrete action to hold the Ortega government to account. Such efforts demonstrate that the OAS backs up its words with action.

Turning to Honduras, we are pleased that the OAS Mission to Support the Fight Against Corruption and Impunity (MACCIH) is working with the Honduran government and civil society to strengthen Honduran democracy and fight corruption and impunity. The United States supports this fight and encourages the OAS and Honduras to find a suitable replacement to Dr. Luiz Guimaraes Marrey, who has served admirably as Spokesperson the past year and will complete his term at the end of this month.

I would also be remiss in not talking about Cuba. In Cuba today, we see an expectation that change is inevitable, and that it can’t come quickly enough. Young Cubans born under a dictatorship are uninterested in hollow revolutionary slogans.

They want what youth everywhere else want: opportunities to use their talents, exercise their voice, and build a bright future for themselves. As democratic societies, we must support young people in Cuba – and elsewhere in the hemisphere – in their hopes for democratic change. We applaud Secretary General Almagro for his efforts over the past year to bring attention to the state of human rights in Cuba.

Protecting democracies—both nascent and long-established—also means defending against malign actors’ intent to interfere and undermine them. Malign interference can take many shapes: debt coercion and manipulation of national elections are two such examples we see playing out around the world.

The United States will continue to urge countries to be vigilant and safeguard against these attempts by outside actors to circumscribe national sovereignty and undermine our democracies.

In closing, and in support of the people of Nicaragua and the people of Venezuela, we rededicate ourselves to the commitments we made 70 years ago in the OAS Charter and in the American Declaration.

Here in Medellin today, we have an opportunity to demonstrate that those commitments remain alive and well. Thank you.