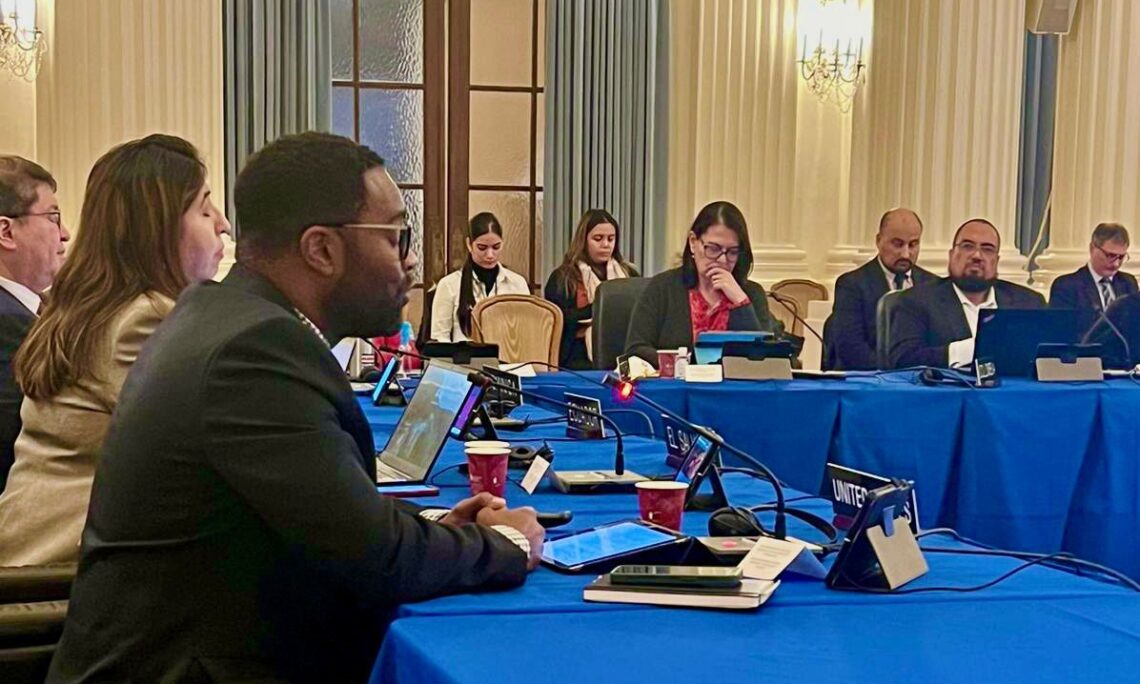 Thank you, Excellency.  My name is Jay Gilliam, and I use the pronouns he/him/his. I am the Senior LGBTQI+ Coordinator in the U.S. Agency for International Development or USAID.

At the outset, and on the behalf of the U.S. delegation, I applaud the topic and timeliness of today’s session on Best Practices for the Inclusion of LGBTI Persons in the Americas marking the International Day for Tolerance.

A special thank you to OAS LGBTI Core Group, which the U.S. is proud to be a member of, and to Mexico and Ambassador Luz Elena Baños Rivas for convening this special meeting.

It’s also excellent to see the participation of the Inter-American Commission on Human Rights and Rapporteur on the Rights of LGBTI Persons.

I would like to begin by observing that this is an exciting moment in the region. In the past several months, we have seen moves toward decriminalization of same-sex relations in Antigua & Barbuda and Saint Kitts & Nevis, banning of so-called conversion therapy practices as well as national marriage equality in Mexico, and Chile issuing the first gender neutral ID card, allowing nonbinary persons to have an “X” marker for gender on their ID card for the first time in the country.

The USG is proud to see these advancements for the rights of LGBTQI+ persons in the region.

For a little background, USAID is active in over 100 countries globally and is the U.S. Government’s lead development and humanitarian assistance agency. We’re proud to have Missions across the region that enable us to develop strong partnerships with Governments, development practitioners, and civil society.

As Senior LGBTQI+ Coordinator, I’ve been tasked by USAID Administrator Samantha Power and the Biden-Harris Administration to work with colleagues in Washington and USAID Missions around the world to advance LGBTQI+ inclusive development.

As a crucial focus of today’s discussion is on the importance of intersectionality, the United States is advancing a vision of inclusive development that sees the full person–not merely sexual orientation, not merely gender identity and expression–but all of the factors that compose an individual’s complex and unique self, so that we support programs that break down the barriers that leave individuals in vulnerable situations.

For USAID, engagement with LGBTQI+ people throughout the development process leads to better outcomes

What does this mean in practice, exactly?

My first trip abroad in this position was to our USAID Mission in Honduras this past summer.

I went to participate in a workshop with local Honduran organizations, including several that work to address Gender-based Violence (GBV) against LGBTQI+ persons.

While there, I announced new support from USAID to local organizations to strengthen their capacity in responding to GBV against LGBTQI+ persons.

Based on recent analyses, two of the most prevalent forms of GBV contributing to irregular migration are intimate partner violence and GBV against LGBTQI+ persons.

Our work also includes training USAID staff and implementing partners on LGBTQI+ inclusion in USAID’s workplace and programs, advancing LGBTQI+ inclusive policies and programming, and working hand in glove with all other partners–including civil society and governments–around the world.

I also understand the importance of LGBTQI+ data in shaping the narratives of our lives. For example, in the late 1990s and early 2000s, based off marketing survey data, the U.S. media cultivated the idea of gay affluence: gay couples who had high disposable incomes.

However, those marketing surveys had skewed samples–most respondents were white, cisgender men in urban cities, not people like me and my transgender siblings of color from the American south.

It wasn’t until we could get better data reflecting the full diversity of our communities that a clearer picture of the economic disparities among LGBTQI+ people were apparent.

This data enabled the movement to have more control over the narratives of our lives, and strengthened the way we advocated.

Since 2016, USAID has also supported the United Nations Development Programme’s “Being LGBTI in the Caribbean” initiative, which funds LGBTQI+-led organizations, supports legal and policy reform, and collects data on the lived realities of LGBTQI+ people across the region.

Last year, for example, UNDP through Being LGBTI in the Caribbean launched a first-of-its-kind report, Human Rights of Intersex persons in Barbados, Dominican Republic, Haiti, and Jamaica.

USAID is also very pleased to support the next phase of Being LGBTI in the Caribbean with $2 million USD for an explicit focus on economic empowerment for trans women through a holistic intervention that seeks to support inclusive public and private policies and model interventions.

The program also recently supported multi-stakeholder roundtables in Barbados that focused on existing data and data gaps on the lived realities of LGBTQI+ people in the Caribbean.

Next, through the Multi-Donor LGBTI Global Human Rights Initiative, USAID supports the Astraea Lesbian Foundation for Justice to fund LBTI-led organizations in nearly half-a-dozen countries in Central America and the Caribbean to advance protections from violence, discrimination, and stigma.

In the most recent meeting of the Equal Rights Coalition in Buenos Aires, which I attended along with colleagues from the State Department, there was clear consensus on the need for members to collaborate like never before–both with each other and with civil society.

This included the urgency of addressing challenges of the so-called anti-gender and anti-rights movements. As we know LGBTQI+ inclusive democraties are strong democracies.

A warm congratulations to the Government of Mexico on assuming the role of co-chair of the Equal Rights Coalition, along with Germany. We are thrilled that you are carrying this forward.

I also want to speak directly to civil society leaders listening today, and thank you for your courage and ongoing advocacy. Your work not only contributes to improving the lives of LGBTQI+ persons in OAS member states – including the United States – it also strengthens the global LGBTQI+ community, giving those around the world more hope.

To end, I want to share a reflection on a recent trip to Mexico for training – through the efforts of the Yaaj, Victory Institute, the National Democratic Institute – of LGBTQI+ leaders who want to run for political office.

50+ leaders from nearly every Mexican state, across political parties, genders and generations who want to take their experiences from civil society to inside the government to continue change.

Included political leaders from across the region who led the training.

First of five trainings across the region over the next year.

Examples of the talent, expertise and excitement in the LGBTQI+ movement in the region, and the change they are leading from civil society to inside government.

I have already learned so much from this group today and look forward to learning and engaging even more.

I can’t wait to see progress continue to advance LGBTQI+ rights across LAC. Thank you once more for having me today at the OAS Permanent Council for this special meeting.