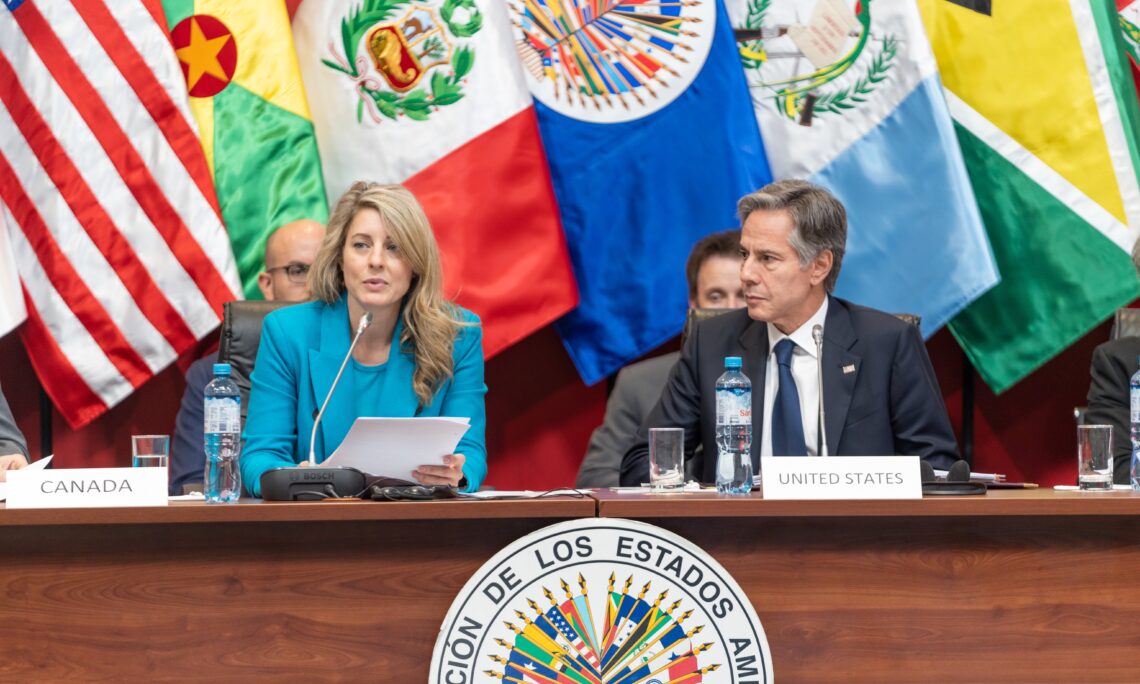 SECRETARY BLINKEN:  We deeply appreciate Canada’s leadership in convening what is an incredibly timely and critical discussion on the situation in Haiti which builds on important discussions that we’ve had on Haiti on the margins of the UN General Assembly and at the senior-level international partners meetings that we’ve held since December of last year.

We are deeply concerned about the deteriorating situation on the ground.  We strongly condemn the acts of violence, the looting, the destruction of the past weeks, including the gangs’ continuing fuel blockade, which has had a devastating impact across Haiti, undermining the health, undermining the safety, of thousands of people.

We’ll continue to promote accountability for those responsible for fomenting the violence, particularly economic and political actors instigating these events for their own interests.

Meanwhile, we commend the efforts of the Haitian National Police, who have been working tirelessly to try to keep the peace.  But they need our help.  They need our continuing support.

Over the past 18 months, the United States has allocated more than $90 million in security assistance to strengthen the Haitian Police’s capacity to counter the gangs, and we are coordinating closely with our partners to discuss what more we can do.

We remain committed to working with the international community and the Haitian people as they seek to restore security and democratic order for a more prosperous future, support for the political track which is so critical, as well as the necessary economic and humanitarian support.

So this is an important discussion today.  We look forward to pursuing it.  But I think you’ve heard from both the foreign minister from Canada and from our Haitian colleague that the magnitude of this challenge is real, and of course, it has been compounded now by the outbreak of cholera that we want to make sure we help our friends get a grip on.

Let me leave it at that for now.  Thank you.

CONSIDERING the statement of the Ministers of Foreign Affairs and Heads of Delegations on the situation in Haiti during the fifty-first regular session of the OAS General Assembly;

RECALLING resolution CP/RES. 1168 (2315/21) of March 17, 2021, establishing the Good Offices Mission with a mandate to facilitate political dialogue to lead to free and fair elections;

REAFFIRMING that any solution to the current multidimensional crisis in Haiti requires the efforts of all stakeholders of the Haitian nation, including the government, the opposition, civil society, including women organizations, and the private and religious sectors;

RECALLING resolution 2645 (2022) adopted by the United Nations Security Council at its 9095th meeting;

CONSIDERING the concerns expressed by the Minister of Foreign Affairs of the Republic of Haiti in his intervention before the Permanent Council of the OAS on August 17, 2022;

CONSIDERING the devastating effects of the earthquake of August 14, 2021, which devastated the Grand Sud of the Republic of Haiti;

REITERATING the recommendations of the Mission of Good Offices of the Organization of American States in Haiti from June 8 to 10, 2021, for the adoption of urgent measures to restore a secure climate;

CONCERNED by the worrying insecurity characterized in particular by kidnappings for ransom and the proliferation of armed gangs that threaten the future of democracy in Haiti and the foundation of the rule of law;

CONSIDERING the concerns expressed by the Office of the United Nations High Commissioner for Human Rights in July 2022 regarding the worsening violence in Port-au-Prince and the increase in cases of human rights violations, including sexual and gender-based violence, committed by heavily armed gangs against the population;

REAFFIRMING the principles enshrined in the Charter of the Organization of American States, particularly those relating to representative democracy and social security;

CONSIDERING the need to strengthen the Haitian judicial system and the civil society, fight impunity, corruption and shed light on the various crimes committed in Haiti; and

FURTHER CONSIDERING that general elections should be held as soon as feasible, when the conditions are in place, to make the country’s democratic institutions functional,