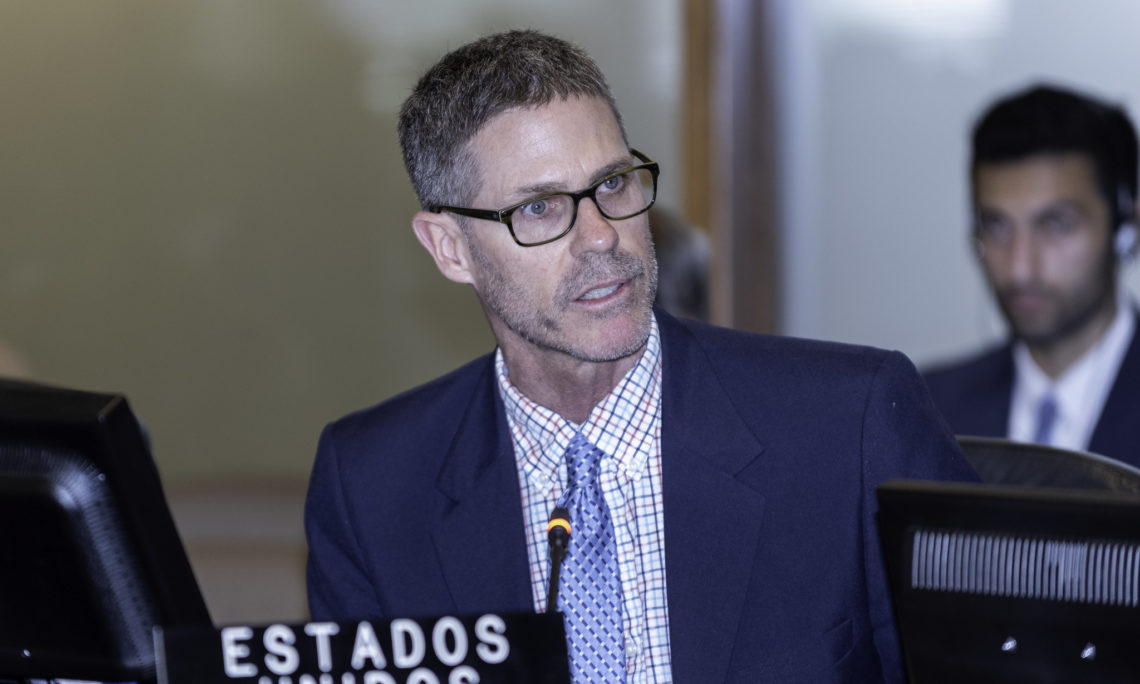 On May 2, 2019, the OAS Permanent Council held a special meeting to address the destabilizing incursion of external actors in Venezuela and the role of the governments of Russia and Cuba in subverting democracy and human rights in Venezuela and propping up the Maduro dictatorship against the will of the Venezuelan people.  The meeting included presentations by: Carlos Alberto Patiño, Professor, Universidad Nacional de Colombia; Maria Werlau, Executive Director, Cuba Archive; Vladimir Rouvinski, Professor, ICESI, Cali, Colombia; and Jose Gustavo Arocha.

Good morning, and thank you to the panelists for sharing this important information with us today.

The United States is committed to advancing democratic governance and strengthening our work with partners in the region. We have a responsibility to work together to address the humanitarian crisis created by the former Maduro regime and support the restoration of democracy in Venezuela.

As we have heard from experts today, Russia and Cuba are playing destabilizing roles in Venezuela’s domestic affairs. They are providing military and political support to prop up the former Maduro regime. In different ways, Russia and Cuba undermine the respect for rule of law, democracy, and human rights in Venezuela. These malign and undemocratic actors also play a destabilizing role for the region’s security and threaten our shared values of democracy and human rights.

Since 2014, Russian engagement in the hemisphere has increased. Russia, far from sharing our democratic values, seeks to undermine them, and to use the crisis in Venezuela to divide us.

Russia has increased its military presence in Venezuela, most recently on March 23 with the arrival of some 100 Russian military personnel, ostensibly to provide maintenance to Russian weapons systems, including the S-300 anti-aircraft missile system, purchased by the Maduro and Chavez regimes.

Former President Chavez also procured at least 5,000 portable air defense systems, or MANPADS, which pose a threat to air-traffic or could easily be transferred to non-state actors.

Russia is using its state-owned oil company, Rosneft, Russia’s and the world’s largest publicly traded oil company, as an instrument to support former President Maduro. Petróleos de Venezuela (PDVSA) owes $2.3 billion to Rosneft, and is also a partner with Rosneft and Gazprom in several joint ventures in Venezuela.

In spite of recent U.S. sanctions, Rosneft continues to purchase crude oil cargoes from PDVSA. Russia is taking advantage of the turmoil in Venezuela to grab Venezuelan oil reserves at deep discounts, depriving the Venezuelan people of their natural patrimony.

Russian companies have helped transport and sell significant portions of Venezuela’s gold reserves, providing the Maduro regime with a quick influx of cash while further bankrupting the country. This is only benefiting the former Maduro regime hold onto power, not to help the Venezuelan people.

We remain wary about Russian intentions to deepen its involvement in the security sector, and to expand Russian-sponsored disinformation campaigns to the region.

We call on Russia to withdraw its military personnel from Venezuela and allow the Venezuelan people to express their will and restore democracy.

Equally seriously and in a far more entrenched fashion, Cuba plays an integral and malign role in Venezuela’s internal affairs. Indeed, the Cuban government, military, and security apparatus is part of the Maduro regime’s very structure.

Cuba continues to prop up the regime of former president Nicolas Maduro and has been critical to his ability to cling to power as his country collapses around him and the Venezuela people suffer.

We know there are Cuban military and intelligence services present in the country, as confirmed by multiple, credible public reports.

It is widely-known both inside and outside of Venezuela that these burrowed-in officers provide physical protection and other critical support directly to Maduro and his inner circle, including spying on Venezuelan officials and citizens to keep tabs on those who may not support Maduro. There has been widespread reporting on this twisted and symbiotic relationship.

Beyond that, Cuba has exported its expertise in repressing its own citizens to Venezuela. This guidance and know-how have been critical to Maduro’s survival and his security forces’ continued violence against the Venezuelan people and unwillingness to heed their calls for change and democracy.

Under Maduro, the Venezuelan secret police have perfected the torture tactics, systems of social control, and mechanisms of repression that Cuban authorities have used on their own people for decades.

As Secretary of State Pompeo said on April 30, “The Cubans are the ones that are the deepest, have been there the longest, have the most direct relationship, are closest to the protection that is being provided to Maduro, and so they are at the center of this malfeasance… we find it unacceptable that they’re protecting this thug.”

Once again, thank you Mr. Chair, and to our panelists, for bringing to the hemisphere’s attention the challenges posed to Venezuela’s future by external interference from undemocratic actors who do not seek to support the will of the Venezuelan people. Thank you.